Switzerland has a unique geography, nestled between countries revered for their culinary excellence. Travelling from region to region, it’s easy to identify the culinary influence from Italy, France and Germany, with each region adding its own traditional touch.  Many Swiss dishes are based on cheese and potatoes, ingredients readily available to the Alpine farmers.

French influences are perhaps the most well-known from Swiss cuisine and include Fondue and Raclette – a dish of hot cheese served over potatoes traditionally served with gherkins or pickled onion. Papet vauois, made from leeks and potatoes served with sausage is another French inspired classic. 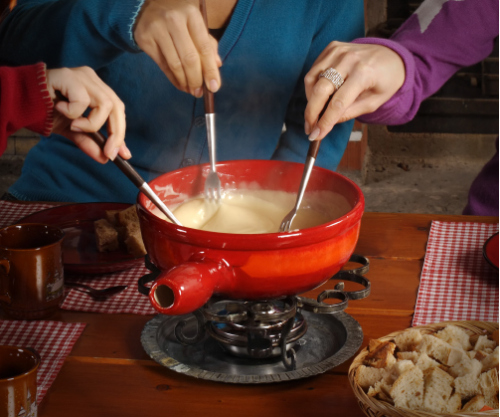 Throughout the Italian-speaking region of Switzerland, influences include traditional dishes such as polenta and saffron risotto, as well as a unique restaurant concept.  The Grotto is a rustic eatery, offering traditional food ranging from pasta to homemade meat specialties including artisan sausage.

Authentic grottoes are old wine caves which have been re-furbished into restaurants, and are mostly found in or around forests, and built against a rocky background.  Typically built with granite block facades with tables and benches made from the same materials, these unique restaurants are popular with locals and travelers, particularly during the hot summer months.

The most popular dishes from the German region of the country would have to be Rosti and Alpine Macaroni – made from macaroni, potatoes, onions, bacon and melted cheese. Rosti, a simple meal consisting of mostly potatoes prepared very similarly to hash browns, is eaten all over Switzerland.  It was originally a breakfast food, but has since been replaced by Muesli, a concoction of oats, grains, nuts and dried fruit.

Try your hand at a classic Swiss dish with this recipe – cheese fondue is perfect for sharing over a cool winter night. Or join us on our 10-day Best of Switzerland trip, where you’ll learn to cook risotto at a family-owned winery.