The day started for some of us at 8am for the optional float along the Snake River through the Grand Teton National Park.

Rugged up in our warmest clothes, we buckled up our life jackets and boarded the rubber dinghies. The river was flowing very fast because the snow was melting and we moved along very quickly, there were no rapids but a couple of rough spots. Our boat had some moments of excitement when we barely missed some branches in the water by just a couple of centimetres; the young guy had to work very hard to get us out of that. None of us wanted to end up in the river, the water was freezing!

We saw bison, geese, eagles and one moose almost hidden among the trees. We saw beaver dams and lots of trees that had been chewed through by the beavers.  Although it was extremely cold out on the river, this optional was a lot of fun and certainly worth doing.

On the road again! We made a short photo stop at a small wooden church, the Episcopal Chapel of the Transfiguration. 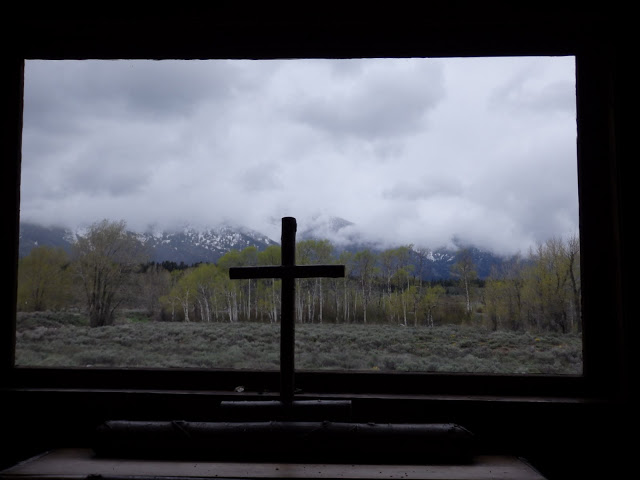 As we travelled through the Grand Teton National Park we stopped at Jenny Lake, Jackson Lake Dam, and the beautiful Colter Bay, a lake surrounded by snow covered mountains. 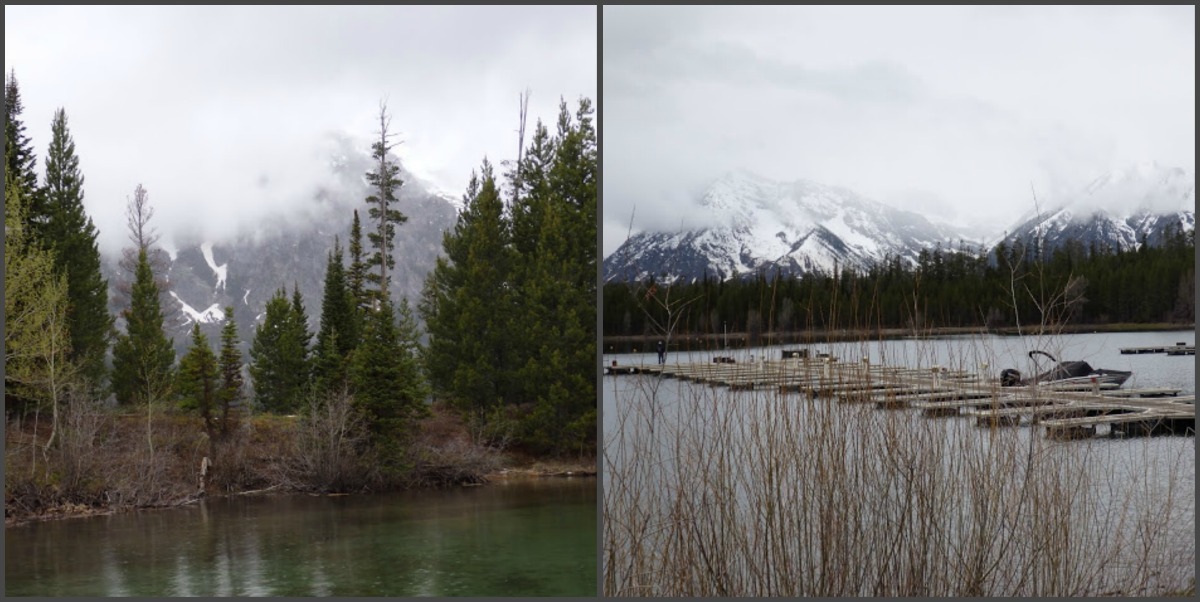 We started to climb in altitude as we entered Yellowstone and a beautiful winter wonderland covered in snow greeted us, complete with heavy snowfalls as we drove along. It was so beautiful. 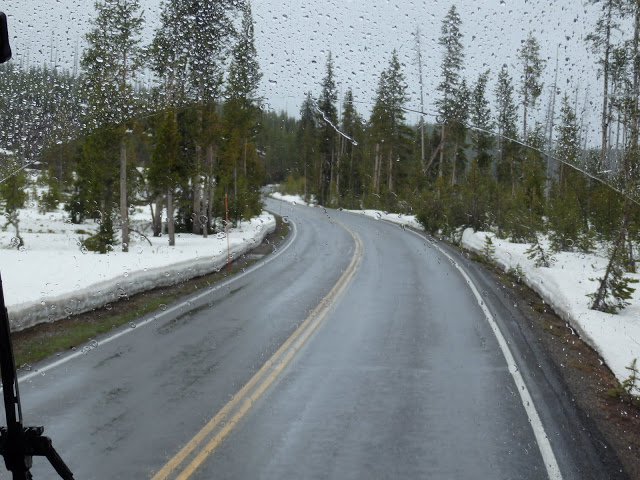 We stopped at West Thumb Geyser Basin and a Local Guide took us around the wooden walkway and explained everything. We walked around looking at the steaming pools – fascinating! 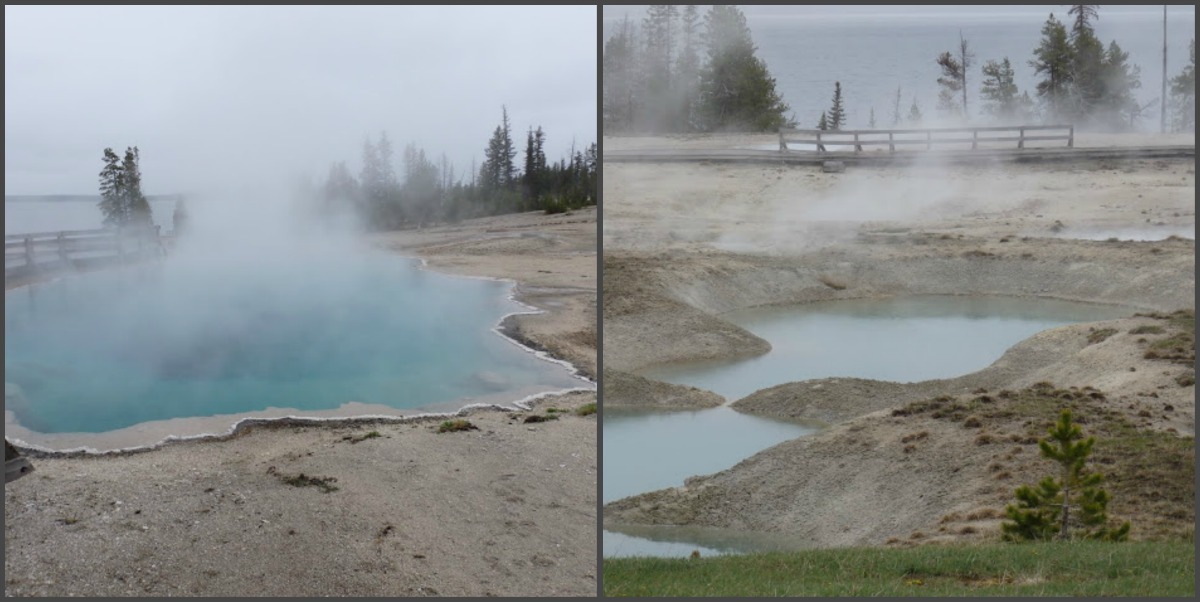 On to the lodge (Lake Yellowstone Hotel), where the accommodation is more basic than we’re used to, but in a fantastic location– right on Yellowstone Lake. There is no television or internet at the lodge, so it’s a nice chance to just relax and enjoy the beauty of the surroundings.

What an incredible day! I was originally interested in this tour because I really wanted to see Yellowstone, and I wasn’t disappointed. The whole Yellowstone area is actually a super volcano and there is lots of thermal activity.

Our first stop was at Old Faithful Geyser, which erupts with a high spurt of water for about 3 minutes every 90 minutes. We stood in place to see the eruption as the rain came down, and then a little hail and more light rain – but it was worth it! 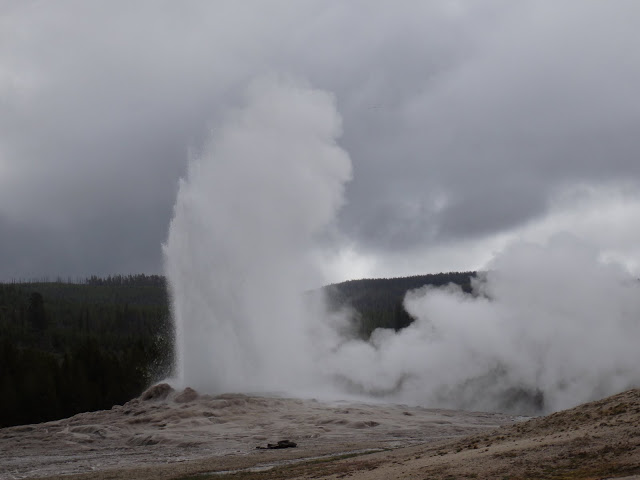 After a stop at the Lower Geyser Basin to see the bubbling paint pots and steaming geysers we stopped in the Canyon Village for lunch. The sun was shining and the air was fresh and clean.

Next stop was at the beautiful Lower Falls and then it was a short drive to the Upper Falls. The Lower Falls are much higher and an iconic image of Yellowstone that appears on many postcards. 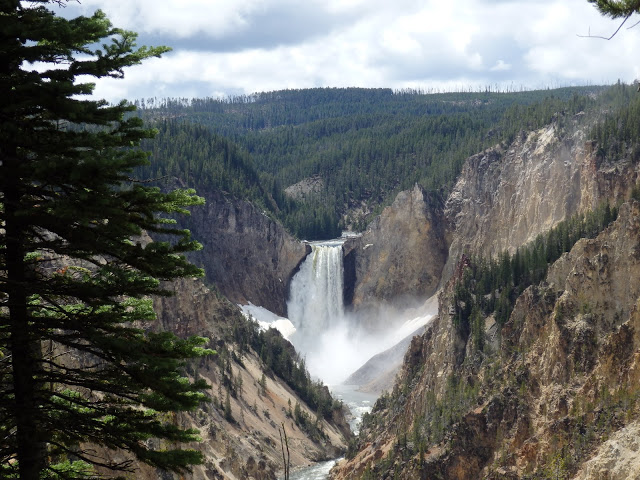 Our final stop for the day was at the Mud Volcano area. The sign says ‘Pungent sulphur smells hint at the seething, muddy hydrothermal wonders you will encounter on this trail.’ The trail on the wooden walkway was steep in some areas and the smell of sulphur (or rotten egg gas) was strong at times but it was worth the effort. During the walk we saw a bison and a chipmunk – but still no bears. 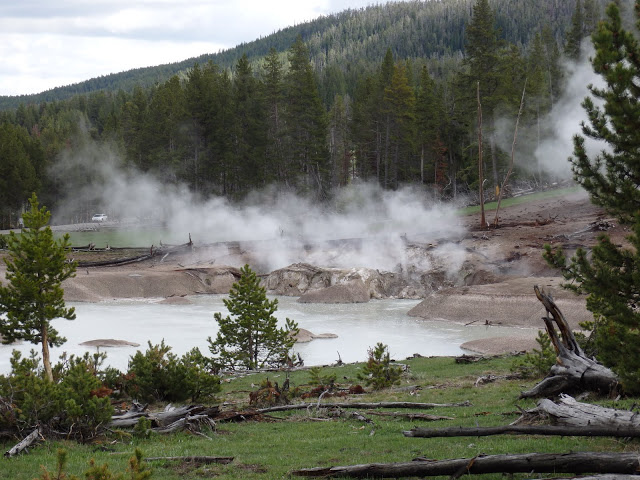 We drove through beautiful snow-covered landscape and had snow falls in some areas, rain in some and sunshine towards the end of the day. We saw steaming vents in the earth, bubbling mud pots and beautiful waterfalls. I feel very lucky to be able to travel and have seen some stunningly beautiful sights around the world. Yellowstone is one place that I will remember as one of those incredibly beautiful places.

We got back to the hotel around 4.30 and Jean and I went for a walk, on the lookout for bears, bison and elk. We walked along the lake edge and saw some fresh animal droppings and prints that made me a bit nervous!

On arrival in Cody, we had lunch and explored the Buffalo Bill Museum. The museum was great, there were sections on Buffalo Bill, the natural environment around Yellowstone, Indian culture, and firearms. We also had a look at the hotel, Irma’s, which Buffalo Bill built for his daughter.

Around 8.30 we reached the Little Bighorn Battlefield memorial, the site of the battle between General Custer’s regiment and several Indian tribes – Custer and his regiment of over 200 men were wiped out by the combined force of the Northern Plains Indians.

We arrived in Rapid City around 4pm. The Adoba Eco Hotel has very modern rooms and is well located for walking around the town.

The day started at 7.45am with an optional trip to Bear Country USA. I was really looking forward to the bear park, seeing we hadn’t seen any bears in the wild. We arrived at Bear Country USA when it was opening at 8am. This is a drive-through zoo/park with fenced animal enclosures. We drove through enclosures with wolves, elk, reindeer, mountain goats, big horn sheep, mountain lions, and of course bears … lots of bears! 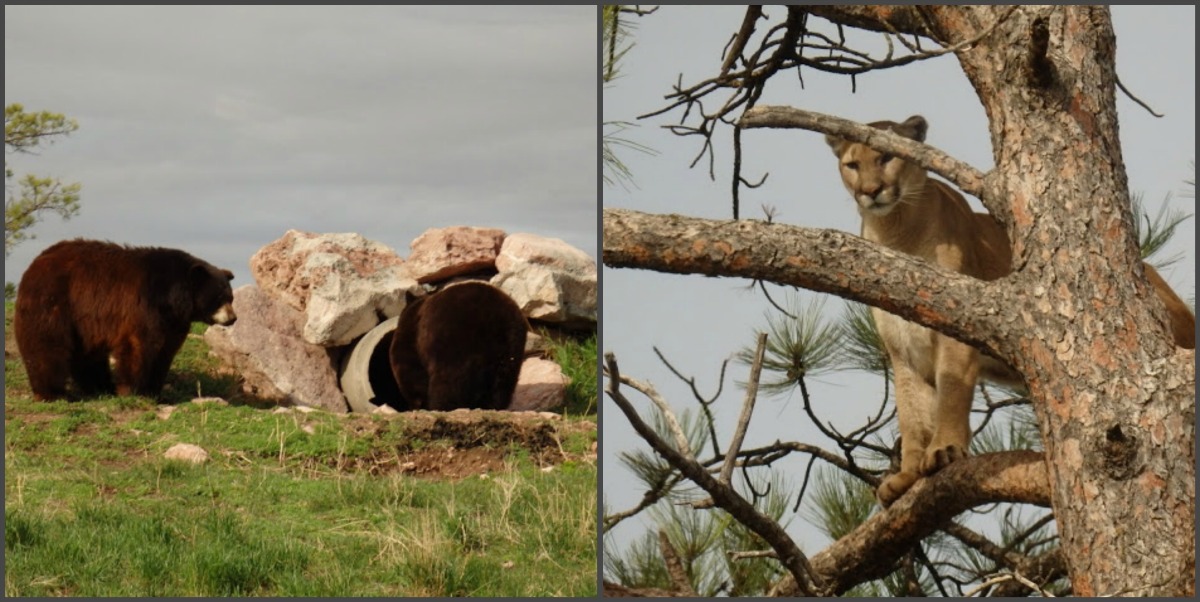 We walked around the smaller enclosures, where we saw a coyote, skunk, red fox, otters, racoon, grizzly bear, and the best part, the bear cubs! The four baby bears were so cute – jumping on each other and playing. 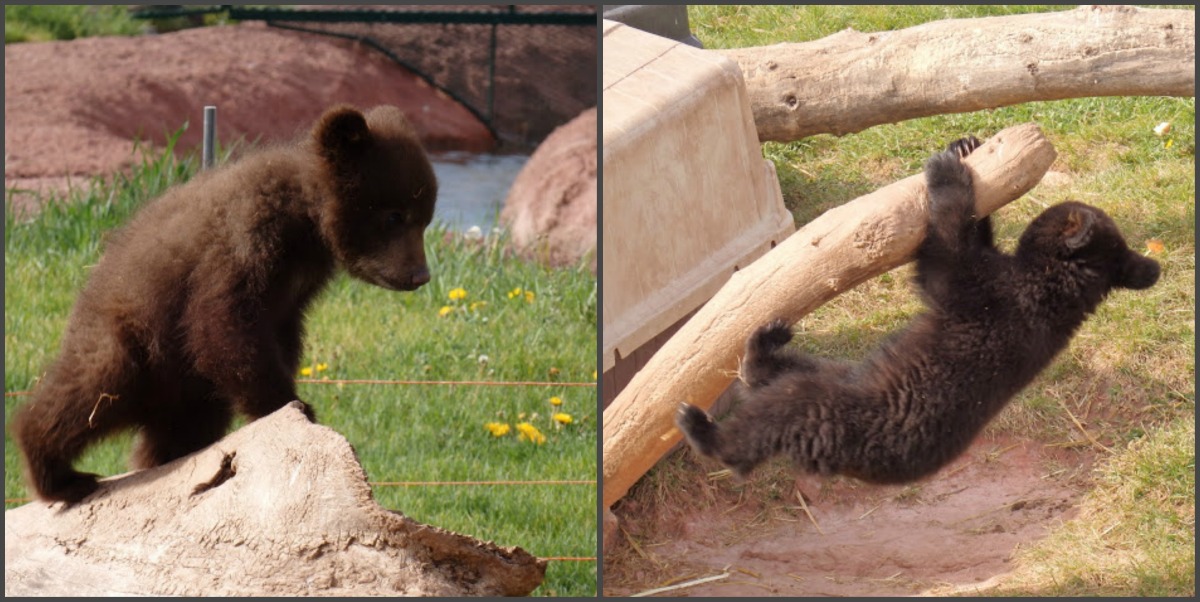 Next up was the Crazy Horse Memorial – a giant figure of Crazy Horse carved into the side of a mountain. It was started after WWII and isn’t finished – the artist’s children and grandchildren are now working on it and nobody knows when it will be finished. The head of Crazy Horse will be 87 feet (27 m) high; by comparison, the heads of the four US Presidents at Mount Rushmore are each 60 feet (18 m) high. 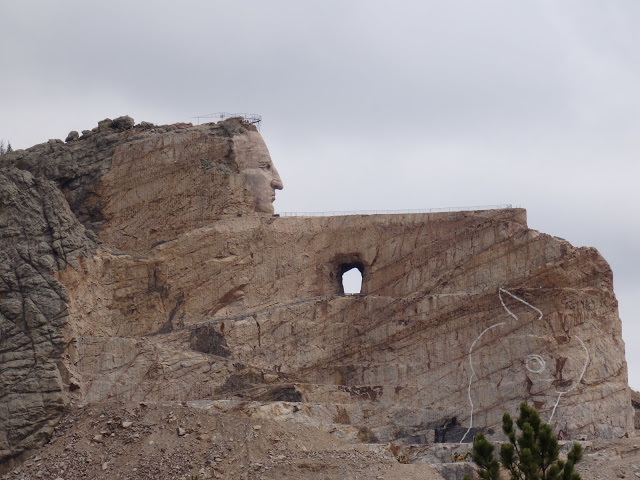 Next we moved on to Mt Rushmore to see the heads of President Washington, Jefferson, Roosevelt and Lincoln carved into the mountain. Jean and I walked around the Presidential Trail, a boardwalk that takes you close to the bottom of Mt Rushmore. 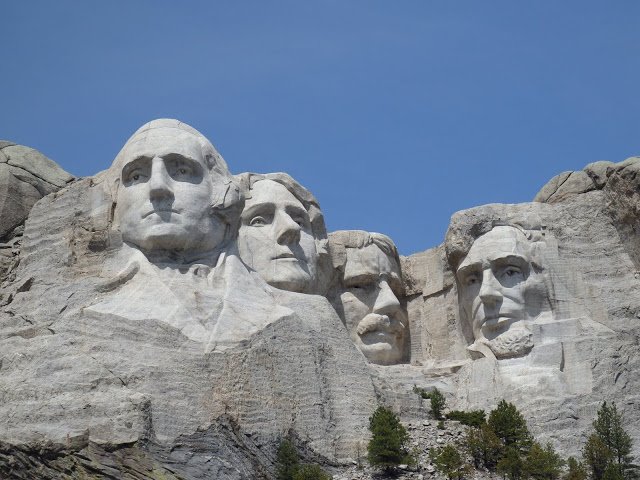 The optional excursion to Badlands National Park was next. Badlands is an alien looking landscape and we saw hundreds of prairie dogs. 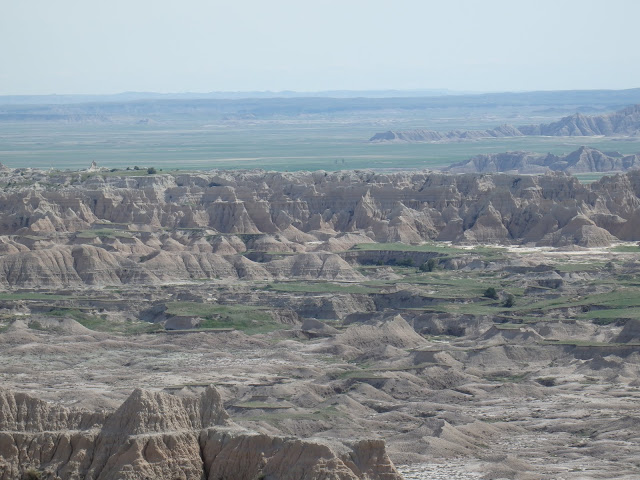