When I decided to go to South America, there was no doubt I would choose Peru. With Machu Picchu, Lake Titicaca and the Nazca Lines, it’s not often that so many sites can attract me to a single nation.

We met our Travel Director, Cesar, at one of the hotel’s salons. There were 34 people on the tour with the majority from the US and the rest of us from Canada, Australia, England and Ireland. After a rundown of the tour, we boarded our bus for lunch at the Casa Diez Conseco. The mansion preserves the architecture and characteristics of a country home from the 18th Century. Lunch was corn soup, pork in creamed corn and an apple pudding. A delicious meal in a unique setting. 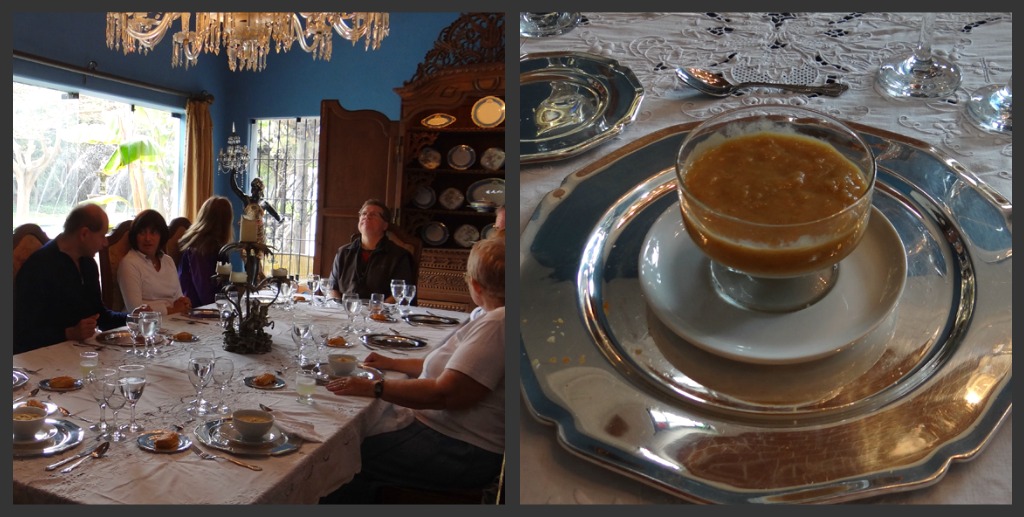 I should note that, without exception, all the meals in Peru ranged from very good to Gordon Ramsey delicious. And I became a big fan of the local pop called Inca Kola – a caffeinated soft drink that tastes like cream soda.

After lunch, we met up with our Local Guide, Isabella, at the Plaza de Armas, the historical centre of Lima. It is surrounded by a number of government palaces and the Cathedral of Lima which boasts a wooden roof to help it deal better with the earthquakes. Isabella showed us the square then we walked to the Monastery of San Francisco which served as Lima’s first cemetery. Its catacombs are filled with the bones of more than seventy thousand individuals and many of the bones are arranged in circular piles. 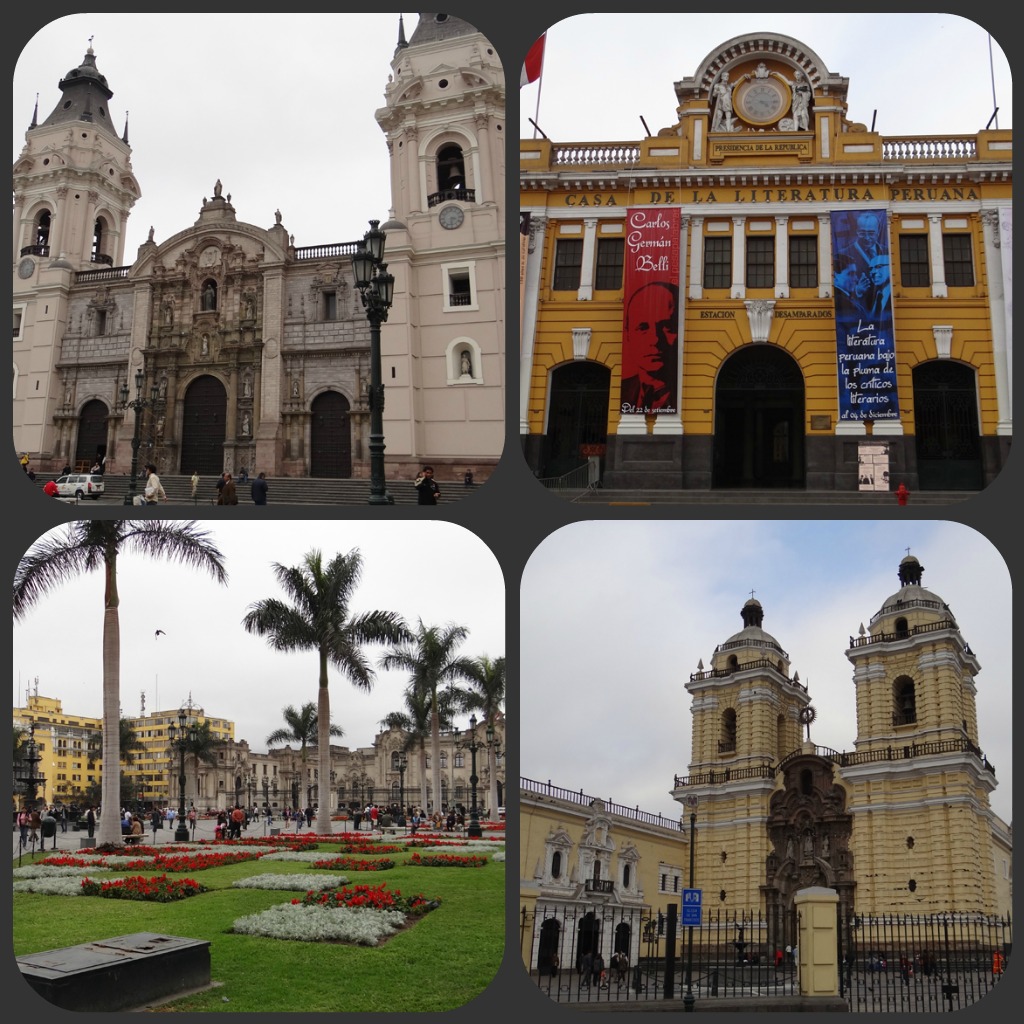 On our way back to our hotel, we passed the remains of a pyramid. The fifteen hundred year old Huaca Pucllana is one of the most ancient structures in Lima. Near our hotel, we visited the LovePark which has a huge sculpture of a man and woman kissing on top of the cliffs overlooking the Pacific. Had the sky been clear, I imagine the sunset would have been spectacular.

The altitude in Cusco is 11,000 feet and by the time we collected our luggage, we could feel it. Most only experienced mild light headedness and Cesar made sure that we all took our time walking to the bus. The best part about the tour is that it deals with the altitude by immediately taking us down to the Sacred Valley which is more than a thousand feet lower than Cusco and then spends the next couple days at 8000-9000 feet. Most people can tolerate this altitude and any symptoms they may have fade as they become acclimated. When I asked Cesar, he said most tourists tolerate the altitude okay and he recommended that anyone with heart disease or severe respiratory problems see their doctor before tackling any travel to this altitude.

We met our Local Guide, Luis, at the airport. Our first stop was at the market in Pisac. It was a chance to try the giant corn and take pictures of gorgeous little girls made up in traditional dress who know you don’t mind paying a dollar to take such a memorable shot. 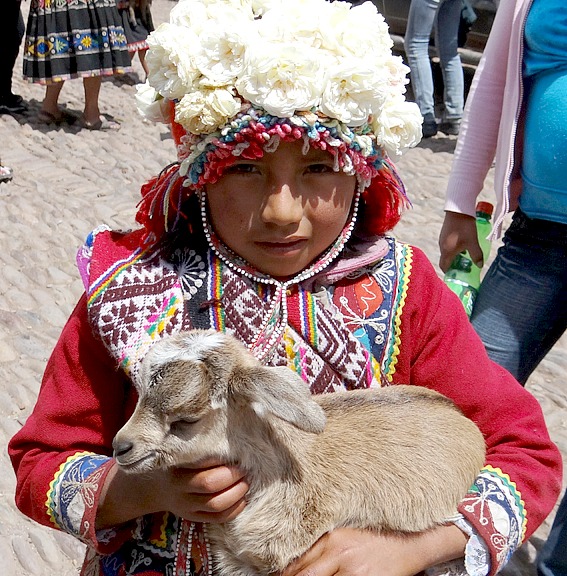 After Pisac, we drove along the valley, stopping for lunch at a gorgeous location on the UrabambaRiver then proceeded to Ollantaytambo, a village where the original Inca town planning remains intact. The day ended at the Sonesta Posadas Del Inca in Yucay.

We woke to a cool sunny morning and were delighted to have clear skies for our visit to Machu Picchu. We took the 7 am train from Ollantaytambo to Machu Picchu town. The train is the only way into the town and takes about ninety minutes. About half way there, we passed a bridge and Cesar told us it was the start of the Inca Trail – a challenging four day hike that many adventurers take to get to Machu Picchu.

Machu Picchu was built more than six hundred years ago and abandoned in 1572 as wars raged throughout the country. The site is so remote, the Spaniards never found it and it sat intact and undiscovered until 1911. The altitude at Machu Picchu is only 8000 feet and was easily tolerated by everyone. Luis kept a leisurely pace as he showed us around the site. We saw the sun temple, the quarry and everywhere was evidence of the Inca’s ingenious building methods that fit the huge stone bricks together without mortar. They carved each stone to fit those around it to perfection. Incredible!

We ate lunch at the Sanctuary Lodge just outside the entrance, and for the afternoon, Luis offered to guide us to the Sun Gate – the point on the Inca trail where those adventurous hikers first see Machu Picchu. It’s a thousand feet higher and offers incredible views of the ancient city and surrounding hills. It was a longer climb than I anticipated, but I made it! Luis took my picture at the altitude marker on top. 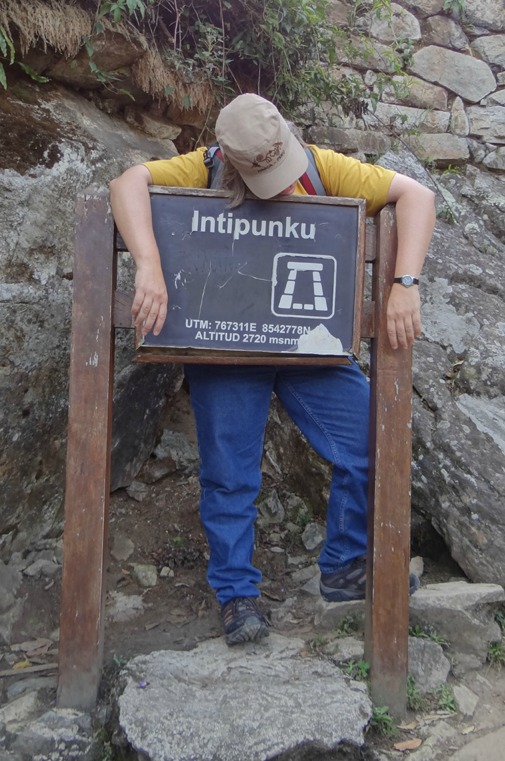 We returned in time to catch the last bus to town at 5 pm. We had another delicious meal and a relaxing evening at the Sumaq hotel after a thrilling and very physical day.