Day Seven: On the Lake

I was woken by a very bright sun shining between a tiny break in my curtains. The sun is very bright at this altitude and I had to dig out my sunglasses for the day. Rosario met us after breakfast and we walked to the pier where a boat took us to visit the Uru people on the floating islands. This was, without exception, the most humbling experience of any tour I’ve taken. These are amazing people. 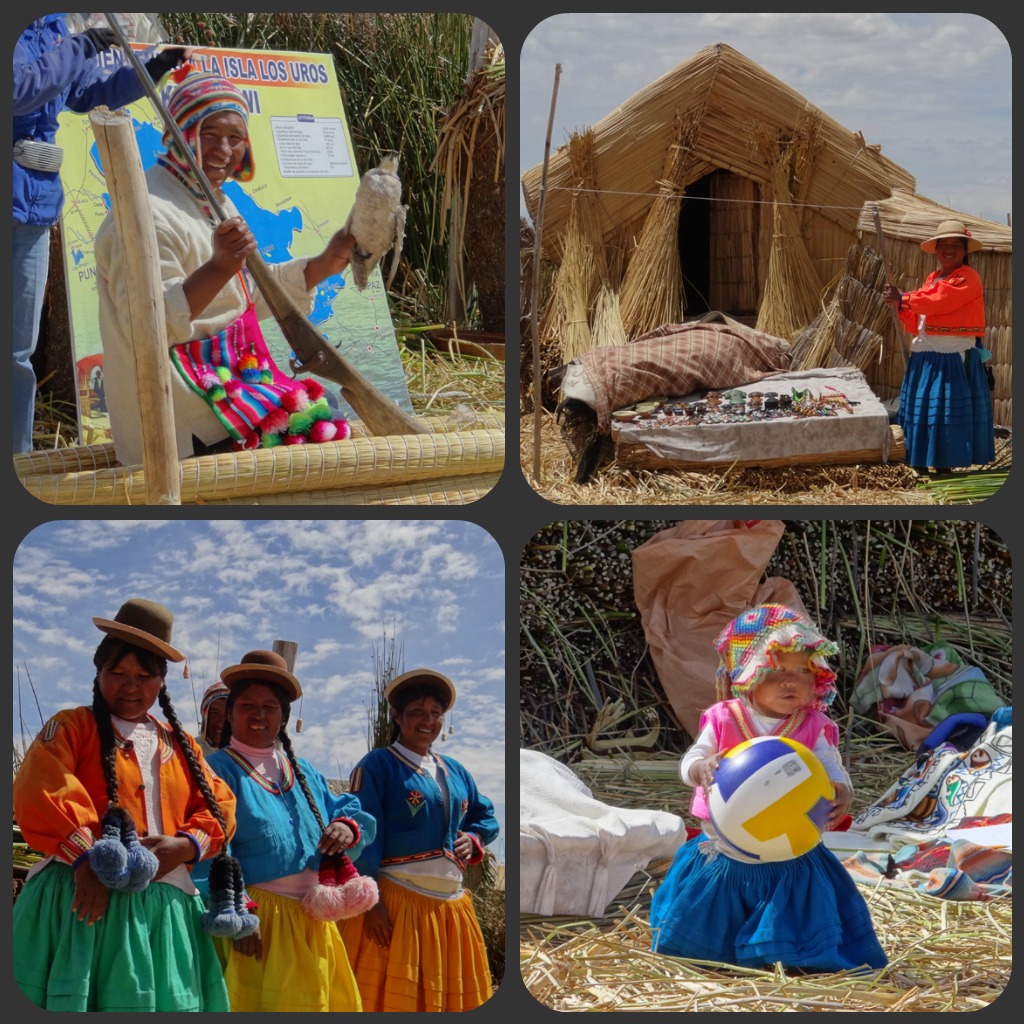 Rosario doesn’t visit the same island each time and picked one today that she hadn’t been to before. The residents were waiting for us wearing colourful clothes and ready to spend an hour telling us about their history, their culture and their islands. Historically, it’s believed that the islands were built for defensive purposes. They use totura reeds to construct their boats and the islands themselves, replacing the islands about every 30 years as the reeds rot. There are about two thousand Uru left living in three groups of islands on Lake Titicaca. Their numbers are dwindling as their children, who are excelling in school, prefer to remain on the mainland after they complete their education.

After the demonstration, they showed us their homes: single room huts built out of the same reeds and complete with a radio that they’re able to power with a solar panel. Outside, they had handmade handicrafts that were a hit with everyone since all the proceeds remain with the residents. When it was time to leave, the women hugged us all and sang to us. We boarded a reed boat and as we sailed away, they gave us one last song: http://tinyurl.com/c2utodh

Next we took a boat to Taquile Island – an hour and forty minutes away. The island was used as a prison during the Spanish rule but was returned to the Taquile people in 1970. They live with the most basic amenities. There is no electricity except for what they get from solar panels. Their handicrafts are considered some of the best work in Peru, if not the world and have been recognized by UNESCO. Interestingly enough, the men do the knitting. 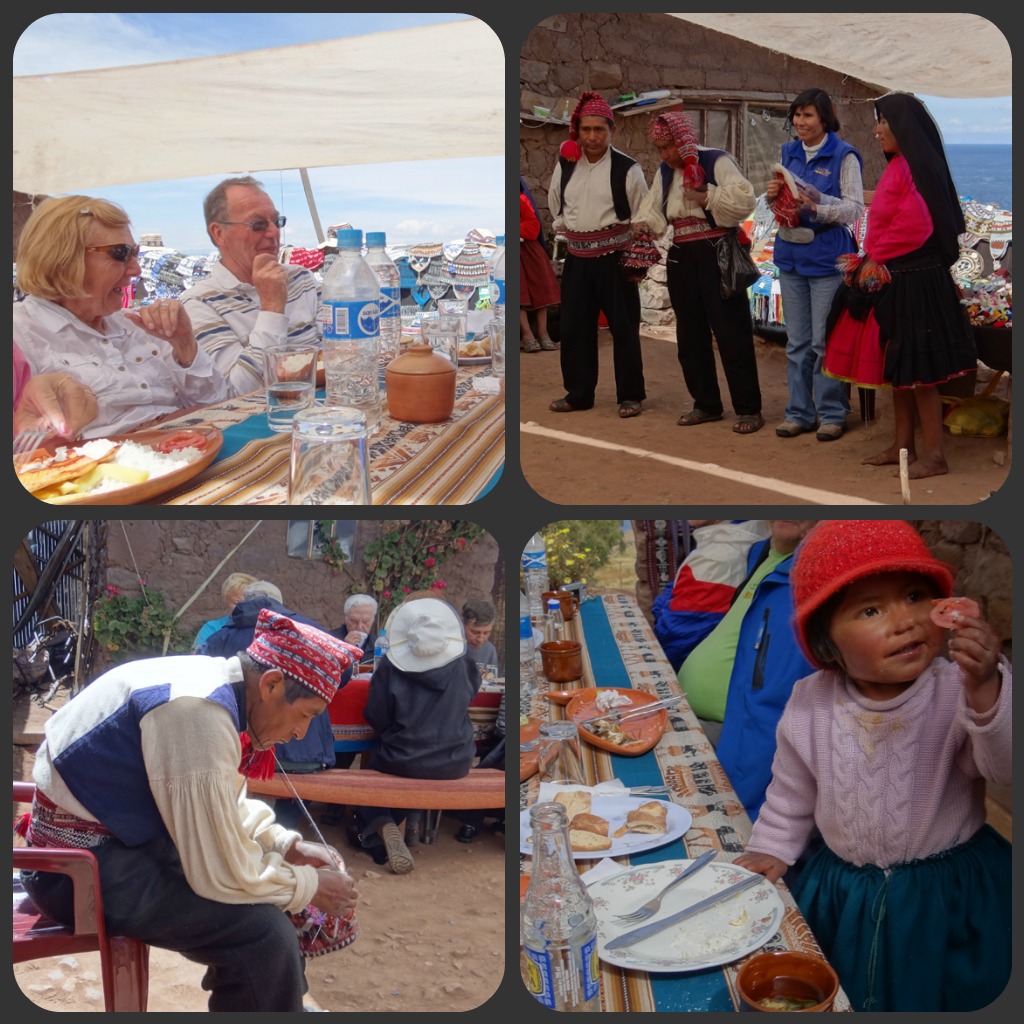 We arrived at the island and had to walk up to the home where we would have lunch. As we ate, Rosario told us about the weaving tradition of the Taquile people and we were given an opportunity to buy some of their superb work.  We returned to the boat for our long ride back to the hotel. That night, we had another great meal that was accompanied by a thunder storm and hail.

Today was a travel day to Ica, a town south of Lima.

It’s an hour drive to Paracas where we checked in for our Nazca Lines flight. The aircraft are modern Cessna Caravan 208B. They carry twelve passengers (six on each side) and our pilot was a Canadian. The one thing to remember when doing any sightseeing flight is that the seats up front are not always the best. Most of these planes have struts that will obstruct the view. 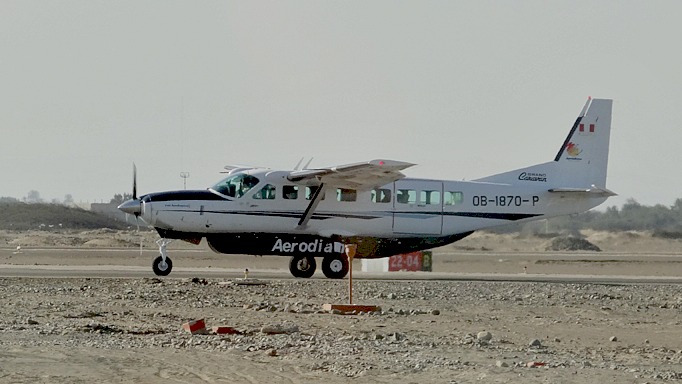 The flight takes about ninety minutes. As we flew over the Lines, the pilot banked the plane and told us which of the Lines was below us. He made a full 360 for one side of the plane then turned around and did another 360 for the other side. It’s a bumpy but thrilling ride. At first, it took a moment to spot the Lines but the moment you see the first one, the rest are easy. 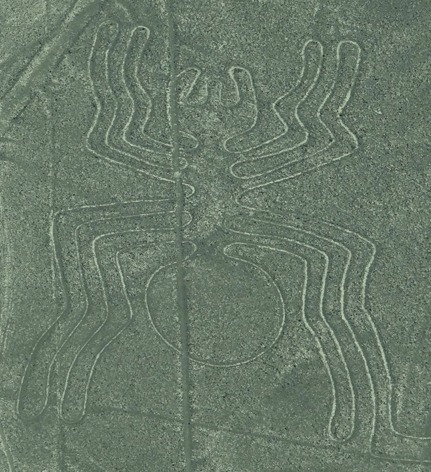 After a great lunch at the La Hacienda resort, we proceeded to the wine tasting. I don’t drink but I sampled the Pisco. Then they came around with the chocolate samples. The coconut ones were very popular. I bought a dozen. We finished the day at the Ica Museum which had a fascinating display from an early Peruvian society that used a technique of wrapping the skull from birth so that it formed into an elongated, alien-like shape. The display was utterly fascinating. 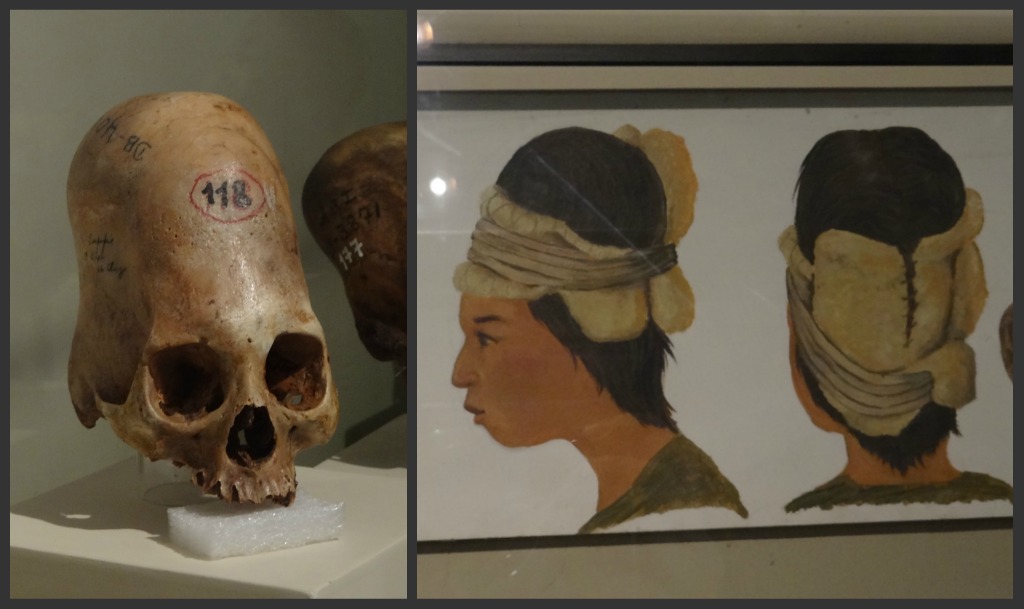 This is my last day on the tour. I chose to fly out late at night as did some others on the tour. The day started with a drive back to Paracas for our boat ride out to the Ballesta Islands. En route, we slowed next to a desert island to view the Candelabra. The geoglyph is visible up to twelve miles but isn’t considered one of the Nazca Lines as it was dated back to 200 BCE. An impressive sight! 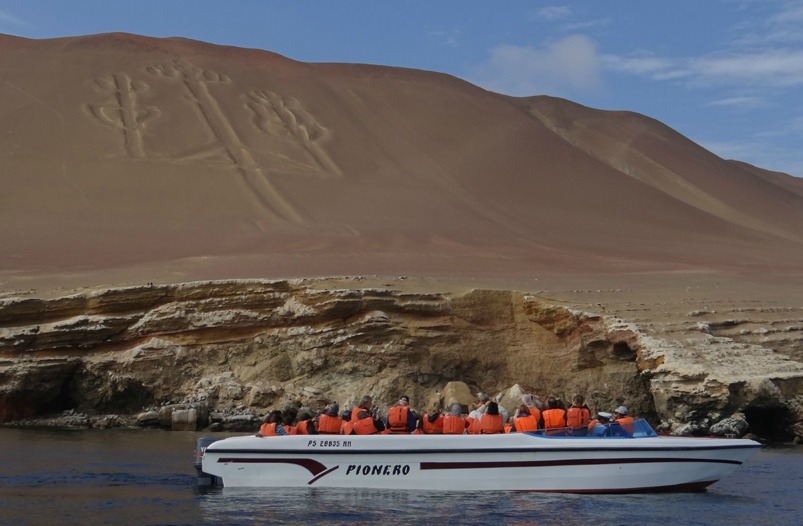 Not long after the Candelabra, we could see the Ballesta Islands in the distance, including the holes in the rocks. 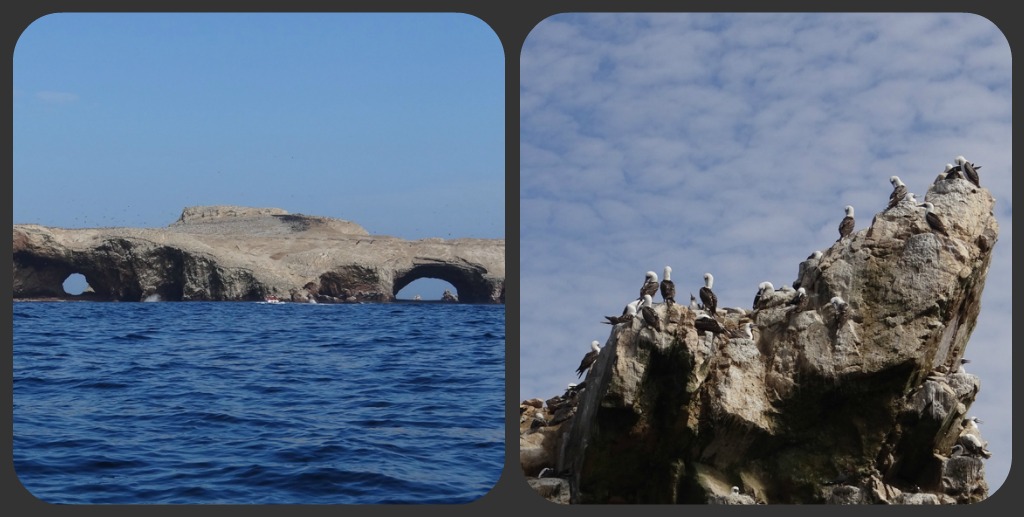 Soon, caves came into view as did millions of birds. The islands are protected and off-limits to tourists landing on them but we’re permitted to sail around them. They are home to more than a hundred and fifty different species of seabirds including boobies, pelicans, humbolt penquins, cormorants and even condors. 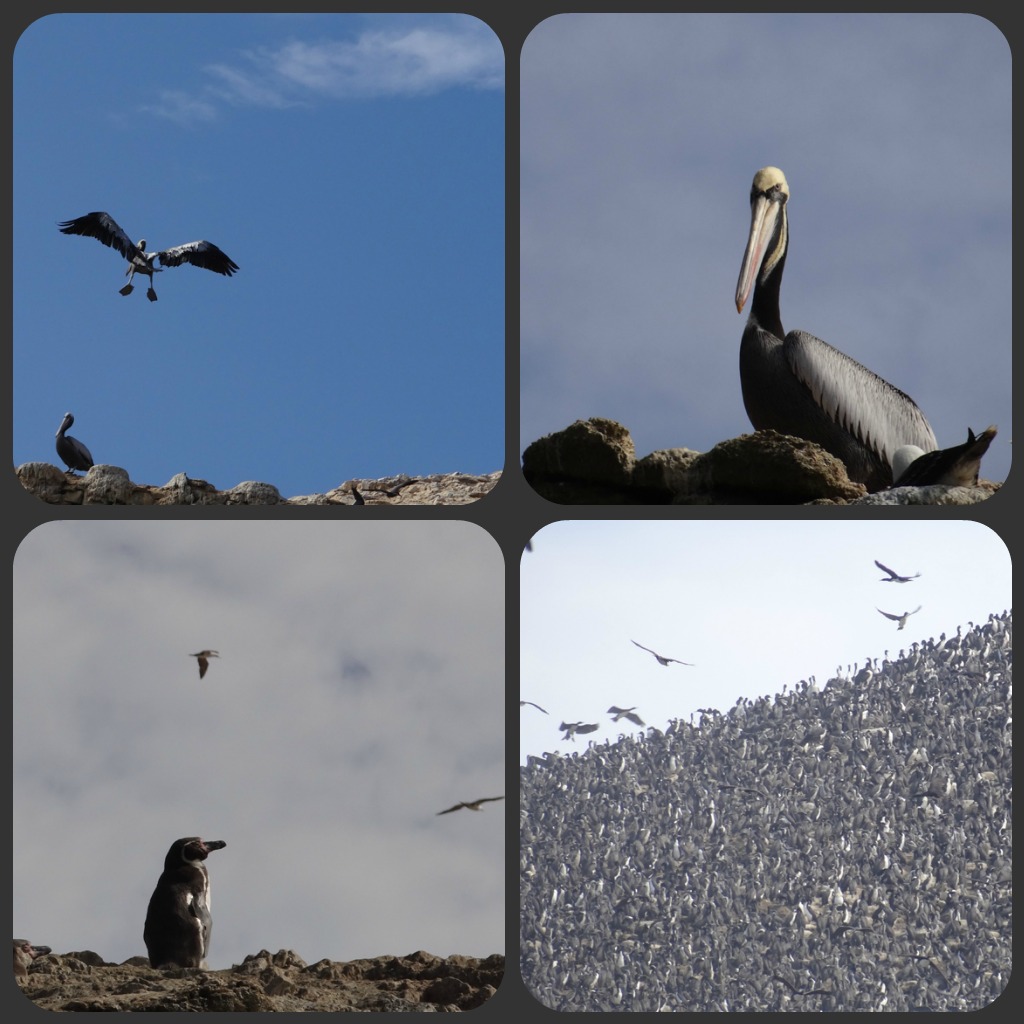 There are also hundreds of sea lions and fur seals. 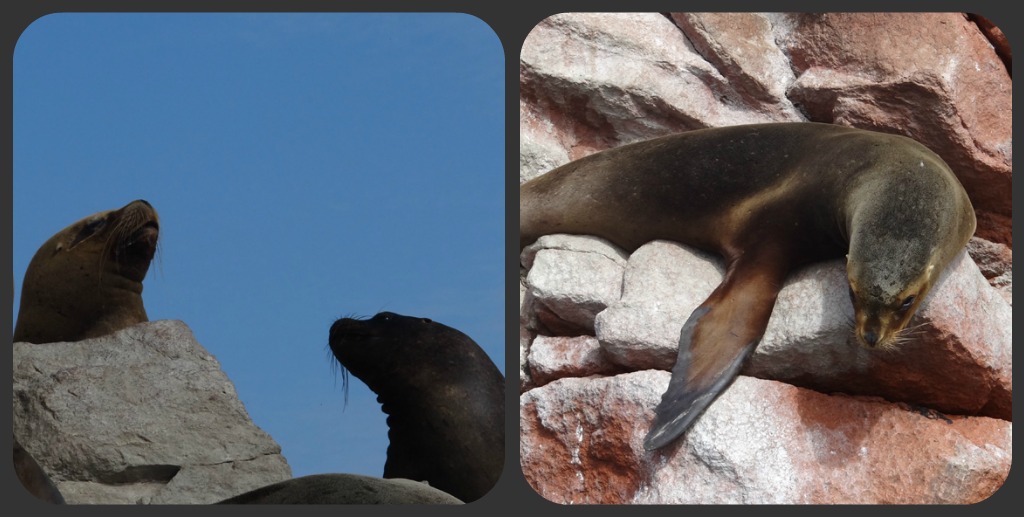 From Paracas, we began our drive back to Lima. We stopped for lunch at a roadside diner, and even here, the meal was amazing. A soup with beef tenderloin and giant corn. After lunch, we drove to a little tourist oasis in the desert. The shop is owned by a Japanese-Peruvian family and sold good quality products for good prices. We arrived in Lima late in the afternoon which gave me time to do some last minute shopping and to pack as I would be leaving directly from the Farewell Dinner. We said a fond farewell to Cesar on arrival as he had an early morning transfer to take care of. An amazing and incredibly patient Travel Director. We were lucky to have him. 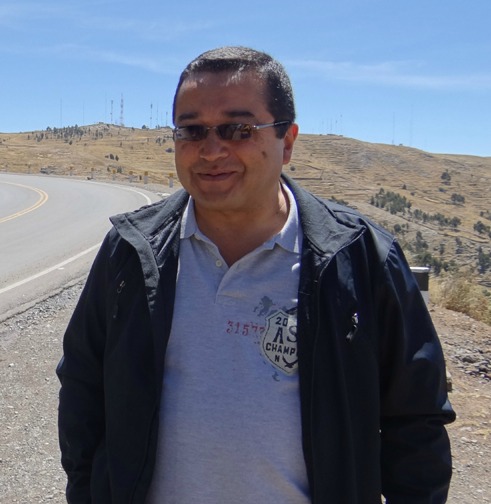 The tour of Peru was everything I expected and much more. We were awed by the structure and views from Machu Picchu, humbled by the Uru people of Lake Titicaca and thrilled with the flight over the Nazca Lines. And we were spat upon by more than one cute and cuddly alpaca. This is an itinerary that I’d rate as fast paced, even exhilarating, yet it had opportunities to relax if you found it too fast.  I highly recommend this hidden gem.