For curious explorers who want to experience something new, the Middle East has many allures. One of which, is the diverse food and culinary traditions that are found across the region. With cultural influences from a melting pot of ancient civilisations, it’s no wonder that Middle Eastern food is so popular worldwide.

Being in the intersection between the continents of Europe, Asia and Africa, the food that you’ll eat in Middle Eastern countries is diverse, whilst still being fairly homogeneous. For example, throughout the Middle East you will find variations of falafel, kebabs and hummus, but each country has their own version.

With a growing demand for travel to Middle East in 2019, we’ve pulled together our top Middle Eastern dishes to try when venturing to countries including Israel, Jordan, Turkey and Egypt.

Hummus is a staple chickpea dip eaten across Middle Eastern, North African and Mediterranean countries, but the Jordanians have their own special recipe. When visiting Jordan, keep an eye out for Fattet hummus. This is the classic hummus dip but layered with torn up pieces of pitta bread, for added texture. 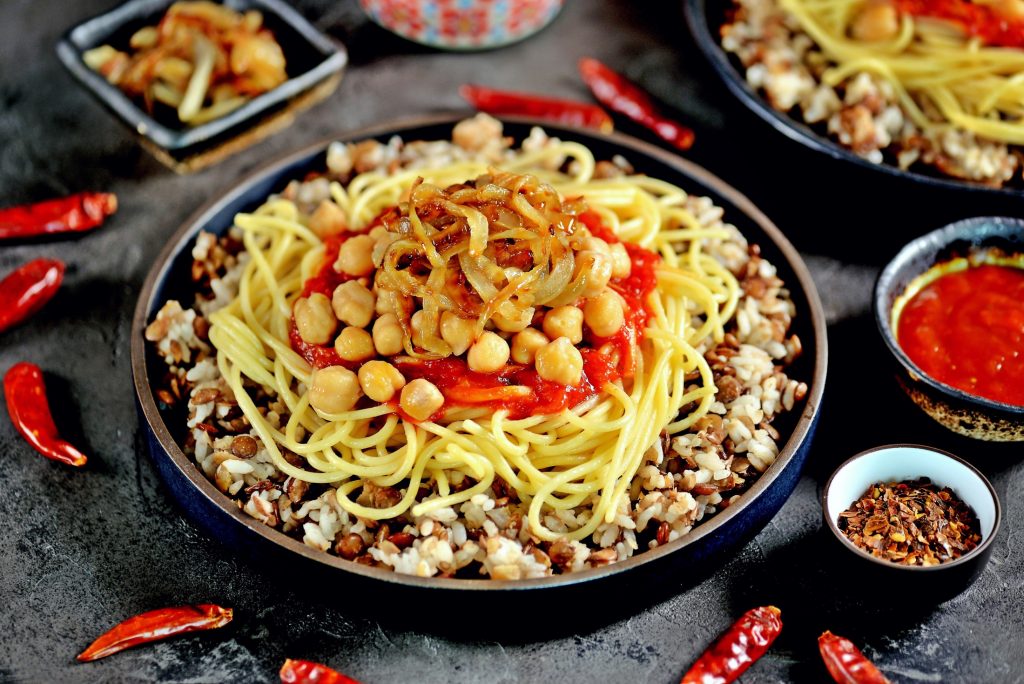 Whilst Egypt is technically North Africa, culturally it is closer to the Middle Eastern countries, particularly when talking about its culinary influences. Kusahari is often listed as Egypt’s national dish. A dish of rice, macaroni and lentils mixed together, topped with chickpeas, fried onions and a hot sauce, Kushari is a hearty meal with a mix of flavours and textures. 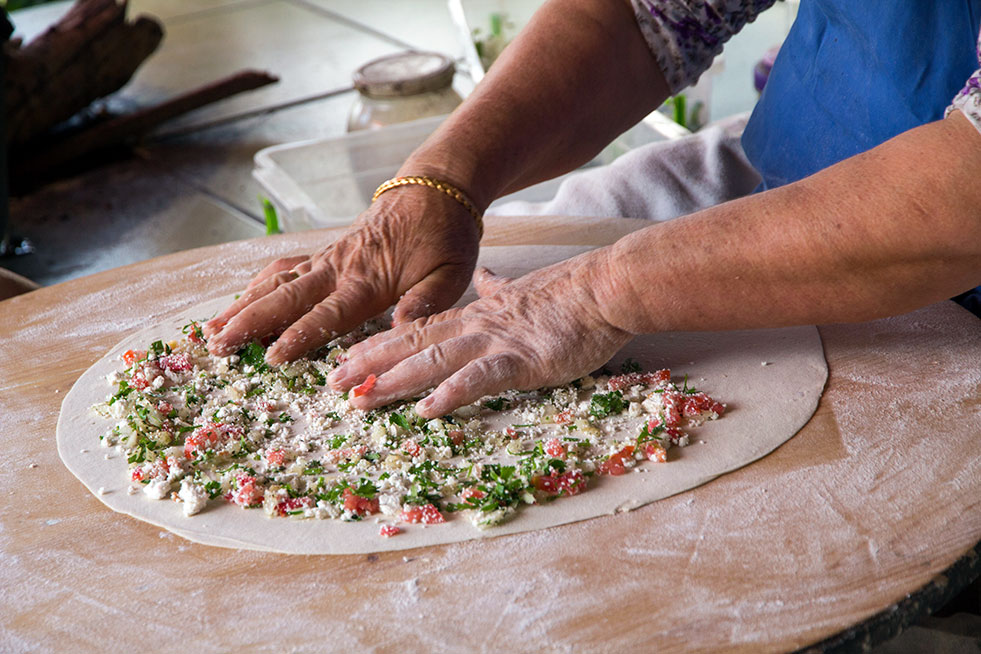 Pizza lovers, rejoice! Travel through the Middle East doesn’t mean kissing goodbye to your comfort food favourites. With lahmacun, or lahmajoun, the Middle Eastern pizza of thin, crispy flatbread, topped with minced meat or vegetables, you can have your slice of heaven in Turkey or Lebanon. 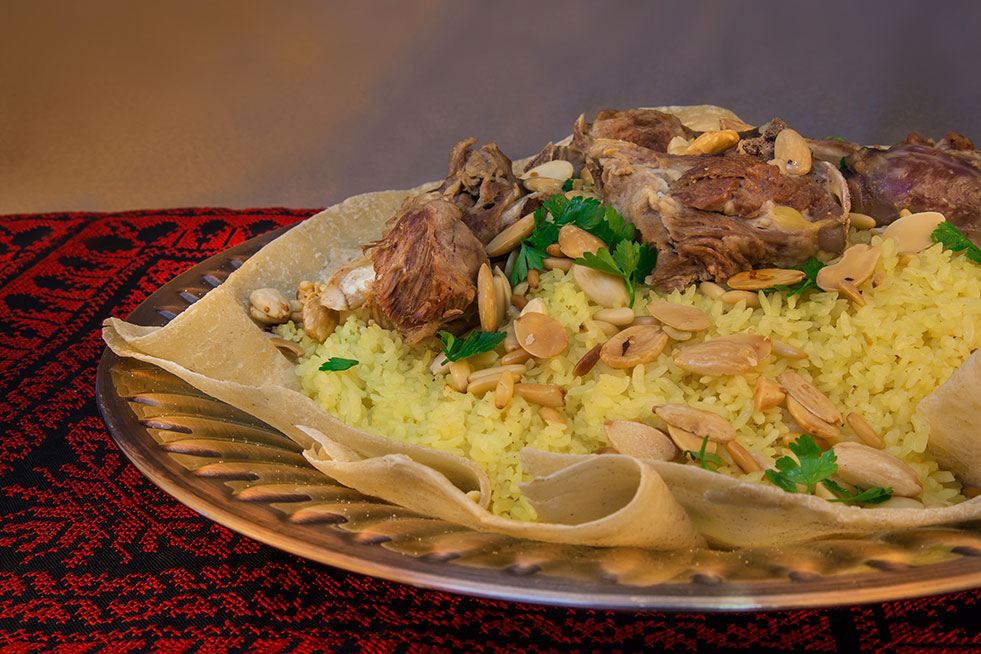 Mansaf is a traditional Jordanian dish of lamb cooked in a sauce of fermented yoghurt and served on a bed of rice or bulgur and topped with pine nuts. This rich, hearty meal, is known as Jordan’s national dish, which is always found at occasions such as weddings, births, funerals and graduations.

Kanafe – Across the Middle East 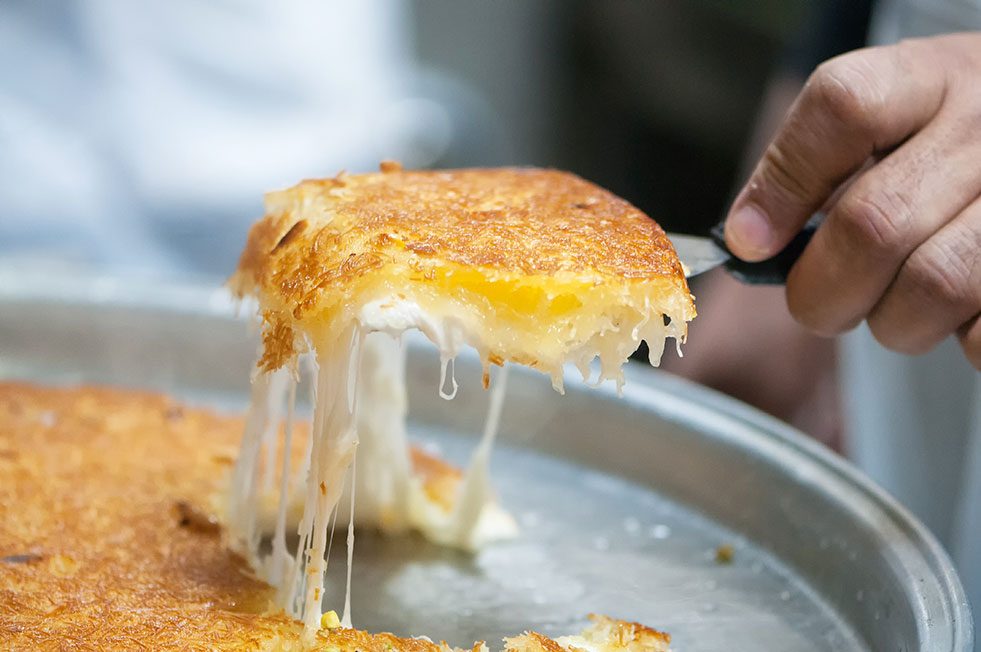 Kanafeh is a Middle Eastern dessert that satisfies both sweet and savoury cravings. It’s a pastry made of shredded filo, soaked in syrup and filled with a stretchy, soft cheese. Topped with cream or nuts, this gooey desert is found across the Levantine region, but particularly popular in Palestine, Israel and Lebanon. 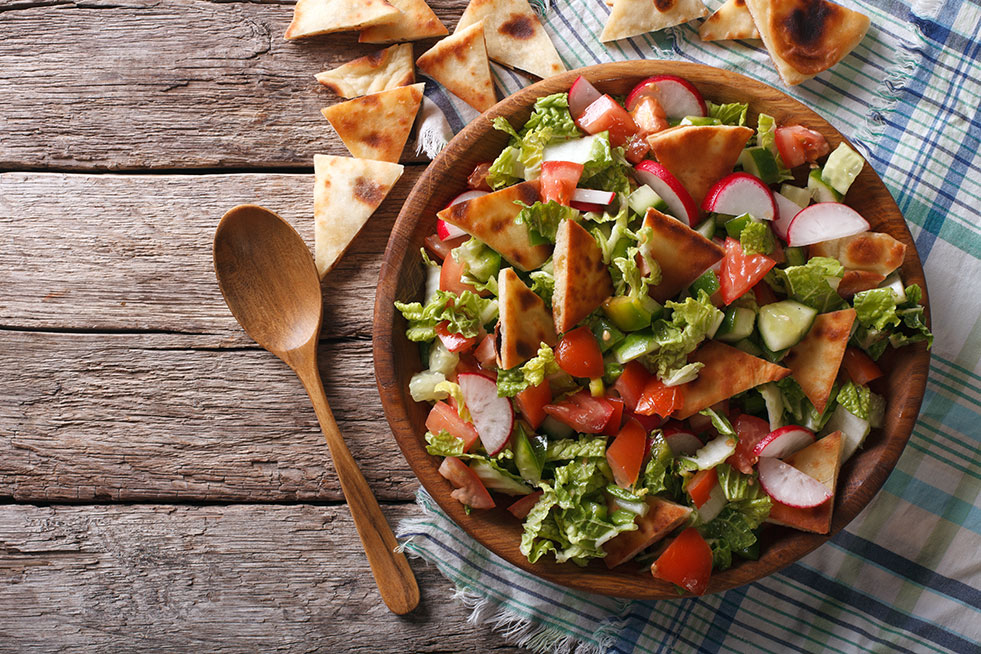 Fattoush is often known as Lebanese bread salad, but is eaten in almost every Middle Eastern country. This chopped salad of cucumber, tomato, herbs, cheese and, most importantly, bread, is served alongside many meals in restaurants and really easy for you to make at home on your return. 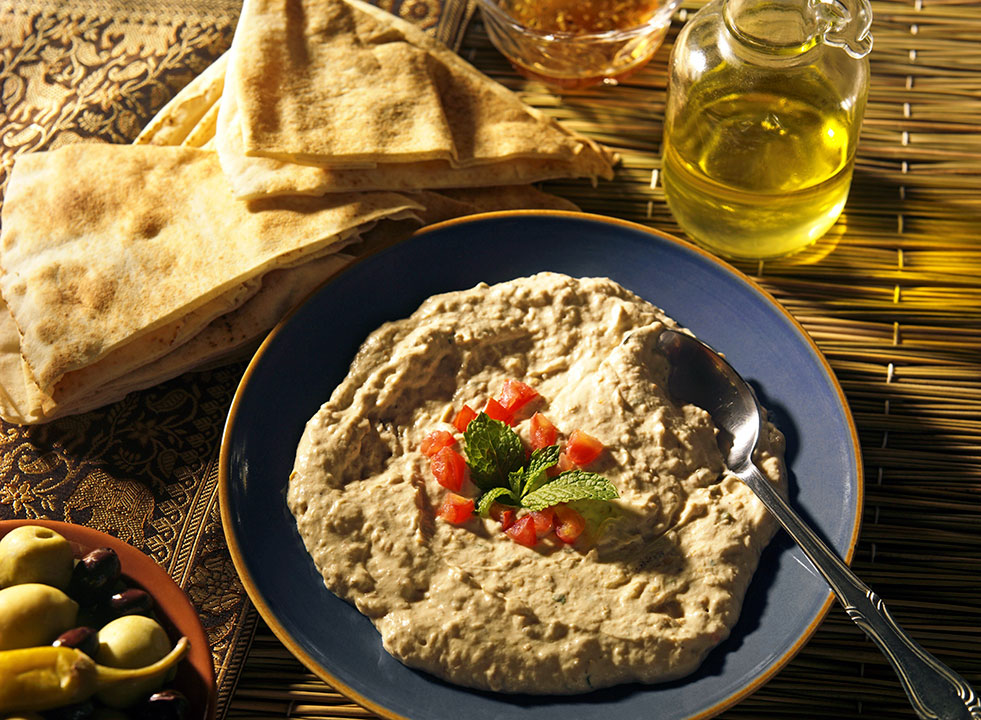 You may not have heard of moutabel, but this aubergine-based dip is the authentic Middle Eastern version of baba ganoush. Smokier than the typical baba ganoush found in the Western world, moutabel is made with roasted aubergine, tahini and cumin, and classically served with pitta breads, like you would eat hummus.

Israeli food is popular worldwide for offering healthy and delicious vegetarian snack food. Sabich is an Israeli sandwich, particularly popular in the metropolitan area of Tel Aviv. A pitta bread stuffed with aubergine or eggplant and boiled egg, sabich was a snack traditionally eaten by Iraqi and Israeli Jews on the morning of Shabbat. Nowadays, it can be found on every street corner of the big cities and slowly emigrating beyond the borders of Israel…

Is this whetting your appetite for your next Middle Eastern trip? Whether you’re off to explore the street stalls of Tel Aviv, rural villages of Jordan or the icons of Egypt, make sure you keep an eye out for these delicious dishes. Already been? Let us know your standout meal in the comments below…