When it comes to photographing a lion on the African savannah or a pack of hyenas hunting their prey, it takes more than skill and a pinch of luck to get the perfect shot.

Mike Myers is a guide and wildlife photographer who grew up in Zimbabwe, and is a dear friend of the Tollmans, the founding family of Trafalgar. Mike has spent many years of his life mastering an understanding of Africa’s wildlife. It is his unique understanding of animal behaviour and knowledge of African wildlife that allows him to try and tell a story with every photo; bringing the viewer into to the animal world.

Mike has a played an integral part in the development of Trafalgar’s new Africa trips, bringing in his storytelling and expertise, to ensure that our guests can also get below the surface and experience The Real Africa.

With every photograph telling a story, we asked Mike to select some of his favourite Africa images and tell us how he came to shoot them. 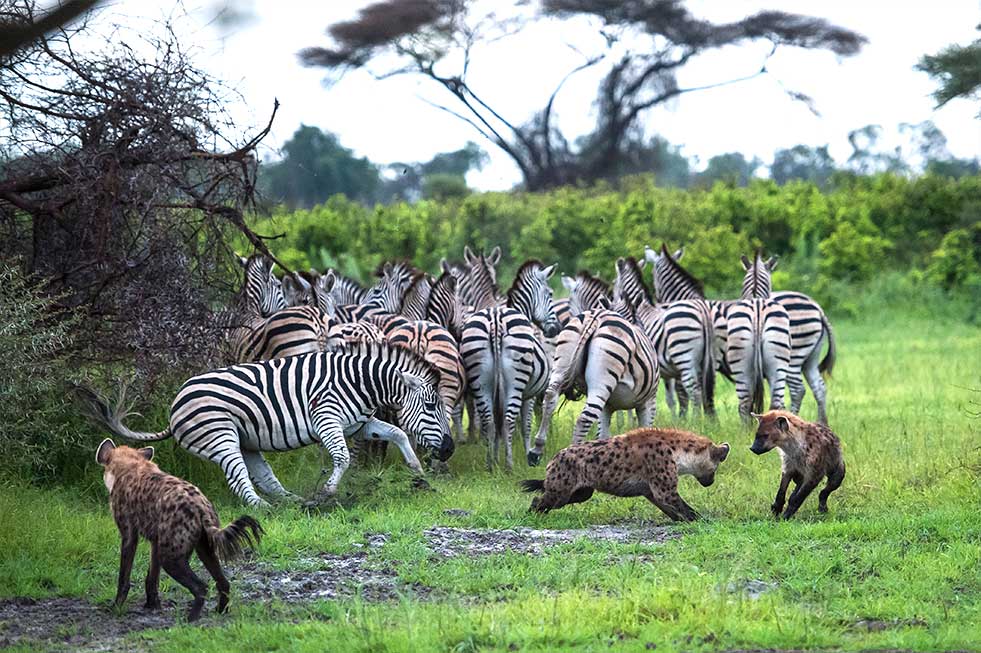 This moment happened pre-sunrise in overcast conditions at Mombo in the Okavango, Botswana. With terribly poor light conditions, this was the kind of off-the-cuff moment that challenges a wildlife photographer.

We first saw the zebra running at full gallop, pursued by the clan of 10 hyena. In the middle of the zebra was a young foal, the unlucky target of the hyena.

We followed in pursuit of the animals, watching the zebra stop suddenly, forming a protective ring around the foal. In that moment, the hyena were defeated; a kick from a stallion can break a jaw, so once they formed a defensive ring with their hind legs to the hyena, the battle of wills changed in the favour of the zebra.

The whole scene was over in five very exciting minutes but is indelibly printed on my memory.

Lions drinking on the banks of Little Makalolo 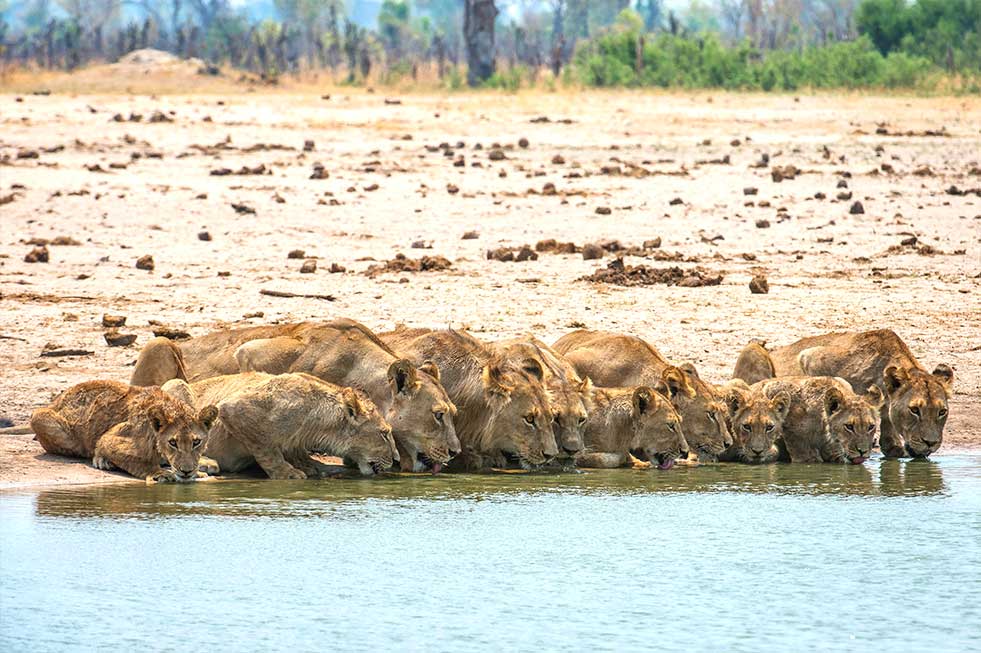 I had missed this photograph once before. There were eighteen lions in the pride and they were asleep close to Little Samavundla Pan, in Zimbabwe. Assuming that they were not going to move till later, we drove to Ngweshla to take a look around, trying to get back before they came down to drink. Unfortunately, we got back just after they had finished drinking and missed the photo opportunity. I could have kicked myself for not waiting patiently!

On the day that this photo was taken, we had photographed the same pride after they had killed a young elephant. We were not far from the camp at Little Makalolo, and as they started to move I knew they were headed to the pan to drink. We drove down to the camp ahead of them and waited patiently for them to arrive. Not long after, they started coming down to the water, one by one, to drink. This time I was perfectly positioned to get this shot.

A black rhino in the Namibia desert 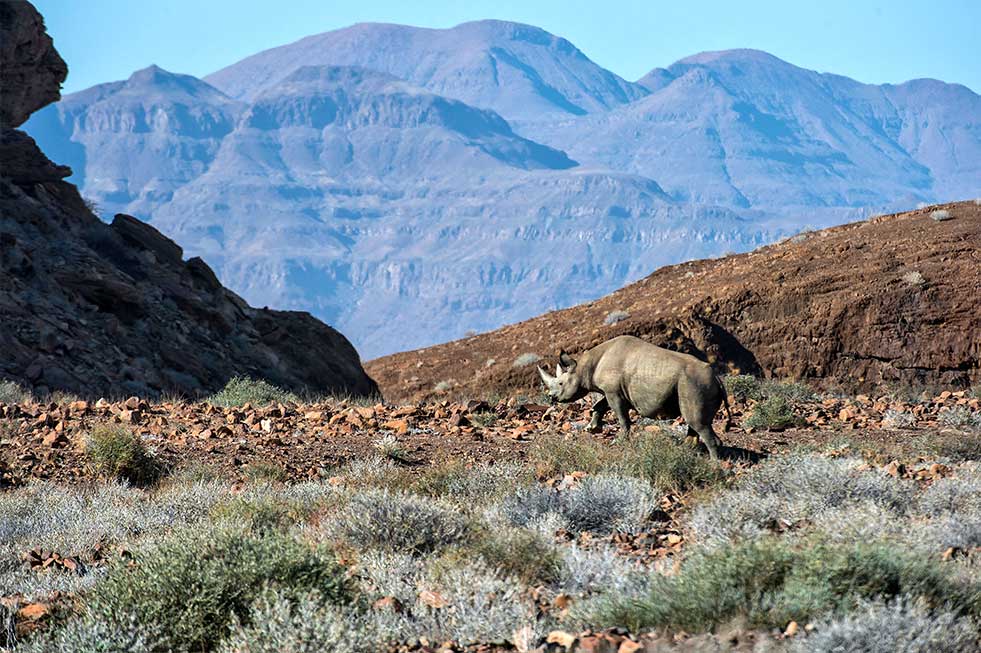 As a wildlife photographer what I look to achieve is a sense of place in my images. This picture of a black rhino bull was taken near Desert Adventure Camp in Damaraland in Namibia.

We had set off early and went down to the Huab River looking for Desert Elephant. I had never seen rhino in this area, so a sighting of one was the last thing on my mind that day.

It was still early when we heard the radio come to life with the sighting of a black rhino bull in the vicinity. We were not too far away, and we found him in good light, keeping our distance so as not to disturb him.

He was relaxed, working his way through his territory and I could see from his direction, he would soon step into the most breath-taking of desert scenes.

Having the time to set up a photograph in your mind seldom happens when photographing wildlife, so this moment was epic. I could feel my heart racing as he moved slowly into this beautiful scene. I held my breath as the moment unfolded and shot off the frames I needed.

When it was done he disappeared over the saddle. We drove around and down to the Huab River. There he was, standing still in a huge desert landscape, looking over his territory without a care in the world.

Considering the current fate of the world’s rhino, this moment triggered a flood of emotions in me. All this photograph shows is this tiny rhino, in a massive landscape. However, it is this one that will always be one of my favourite images.

The late Cecil the Lion 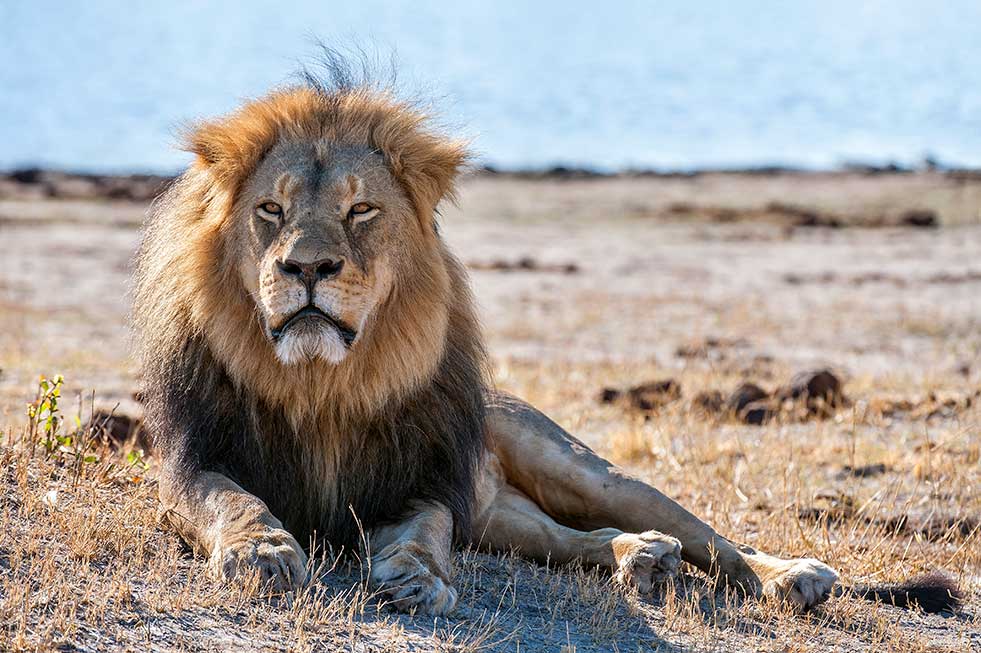 Looking back on the plethora of wonderful animal characters I have come across, pictures of great lions, leopards and cheetahs fill my thoughts and my photographic library. Perhaps the greatest of all these was a magnificent male lion, incongruously called Cecil, who I was able to see often in the Widerness Safaris concession area in South East Hwange National Park.

Few sights say “Africa” more strongly than that of a big male lion and Cecil certainly played the part well. My pictures tell the story of this amazing lion confronting buffalo, gently playing with his cubs or just posing as though for the cover of a glossy magazine.

When I first came across him at Back Pans near Linkwasha in 2010 he was mating with a lioness in the pride and several other females had cubs already. This was his territory and he held it alone. For the first few years I saw him whenever I was in Hwange – perfect in every way and almost unscarred. Then two new and younger males moved into the area and even at his great size, two against one always wins.

Once he lost the area I thought I would never see him again, but Cecil re-invented himself and linked up with a younger lone male called Jericho in the area of Ngweshla. I saw him mating near Makalolo in 2014, and more cubs were born in January 2015 though sadly I never saw him again after that…

Cecil was killed on a commercial hunt in early July of 2015 by a bowhunter. It is unlikely that his death was quick, but either way, Cecil deserved to die naturally and not at the hands of hunters.

For too long trophy hunters have claimed that what they do has a conservation ethic. In my view, the practice of shooting any animal in their prime, has nothing to do with conservation and everything to do with money, however the Professional Hunting fraternity try to package it.

Killing big male lions, particularly pride males, prevents the prides from settling to raise their cubs, which takes a few years to achieve. Before the practice of hunting was stopped in Botswana, only juvenile male lions were seen in the Linyanti hunting area for over seven years.

Sadly, the lions of Africa are in decline and the loss of such a perfect specimen as Cecil is yet another nail in the coffin. His greatest value to Hwange and the country was simply being alive. He is sorely missed by all who were lucky enough to see him or know him as I did. 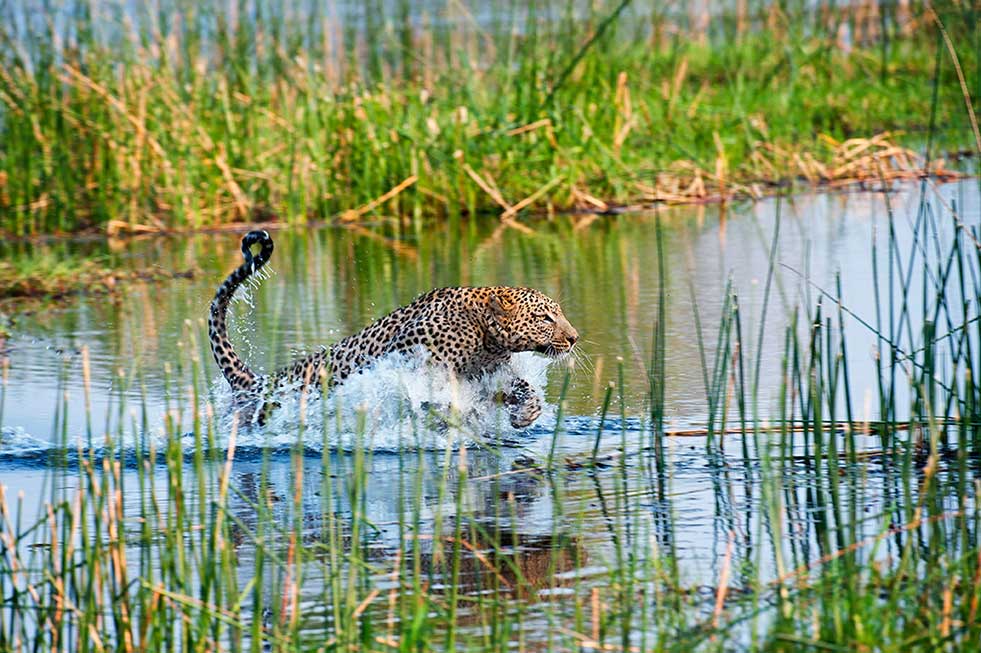 This amazing leopard was the dominant male in the southern part of the Linyanti Concession. Despite leopards being difficult to spot in the wild, every time I went there he would appear, as if by magic. His favourite place was on top of a termite mound under a great ebony tree and he would often hunt there.

He gave me some of my greatest leopard sightings. Once I was working the northern bank of the Savute Channel and had just stopped for tea when I saw one of the Wilderness Guides come out of the tree line on the opposite bank with him just in front of the Land Rover. It looked to me as though he was intent on swimming through the channel and I moved up as quickly as I could to get to the place I thought he would cross. He did not let me down.

My first few shots were as he got into the water in front of the Land Rover and once these were in the bag I zoomed in on him. I had reeds between my position and him swimming which was frustrating the autofocus and these shots of him were soft and out of focus. Just as he reached the more shallow part of the river and his feet touched the bottom he gave a jump and at this crucial moment the autofocus locked on to him and I had the shot.

This picture of mine with him looking straight at me from on top of his favorite termite mound is the one I love of him. Something in his look is special. He was without a doubt one of my favorite animal characters.

To find out more about Mike Myers and his Africa wildlife photography, visit mikemyersphotography.com/

72 years in the making, Trafalgar have curated some of Africa’s best safari and wildlife experiences, in a handcrafted collection of African itineraries based on unrivalled expertise, passion and a family connection to the continent.

Inspired to go on your own African wildlife safari? Take a look at our new itineraries and let us know what animal you’d most want to see below.