8 alternative, unusual and fun things to do in England

There is much more to England than its illustrious capital. Venturing outside of London’s crowds and into England’s rolling green countryside, up into the industrial Northern cities and out to the Jurassic coastlines, will allow you to see the diversity and beauty of the country’s rich heritage. Here is our pick of unusual things to do and places to visit in ‘alternative’ England.

Get Cultural in Liverpool

Made famous around the world by ‘The Fab Four’, Liverpool has undergone a modern evolution. Becoming synonymous with popular culture after being awarded European City of Culture in 2018, every year the city hosts various art and music events. For example, the month of May sees Liverpool host its annual Liverpool Sound City music festival. With a vibrant culinary and bar scene to explore by night, Liverpool has transformed itself from its industrial past into an edgy metropolis. Take a historic Beatles tour of the city, or explore one of the more modern art or culture installations taking place. 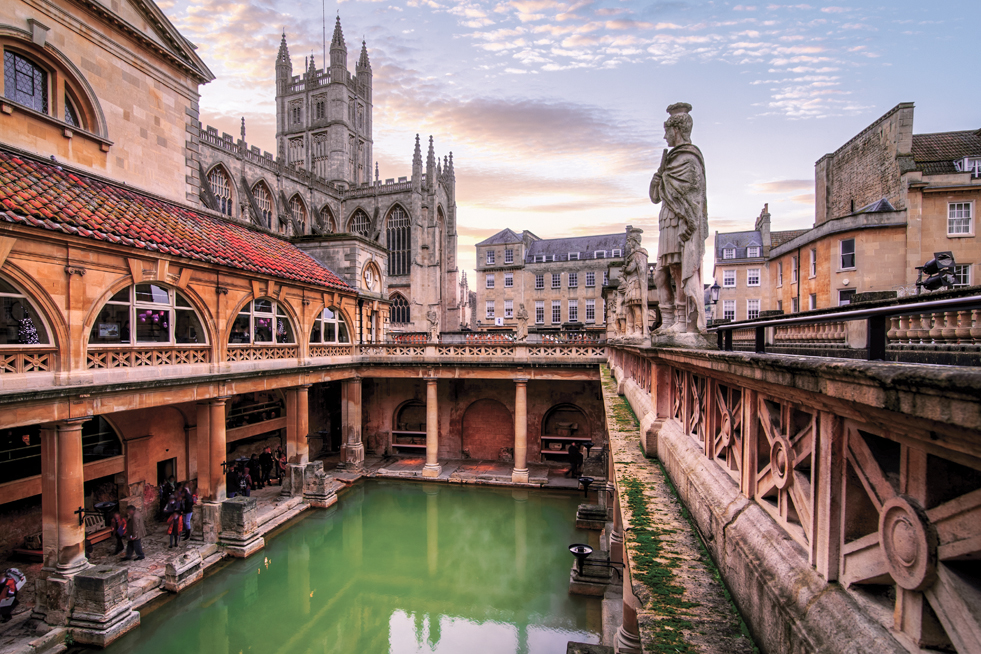 Wellness travel may be a relatively modern concept, but the Romans were onto a trick, even way back then. With the only thermal hot springs that you can bathe in in the whole of Britain, Bath has long been a tourist attraction. Set amongst the rolling English hills, as well as the ancient Roman baths, the city is lined with beautiful Georgian buildings, housing independent gin bars, restaurants and retail stores.

For an easy day-trip out of London, take a short train-ride up to Cambridge where you can visit the world-famous University, which is responsible for educating the likes of Stephen Hawking, Sir David Attenborough and Charles Darwin. Weather permitting, spend the afternoon punting along the River Cam, for a quintessentially English day out.

Discover the Medieval City of Durham

All cobbled streets, cosy book shops and classic English charm, Durham is one of Northern England’s most charming cities. The beautiful Romanesque 11th century Durham Cathedral takes centre stage for most visitors (and unsurprisingly so), whilst the countryside surrounding the riverside city really helps England live up to its reputation as a ‘green and pleasant land’. Harry Potter fans will recognise the cloisters of the Norman Cathedral, which double as the Hogwarts quadrangle in the films, whilst those will a sweet tooth will find sugar induced happiness at the Tealicious Tea Room.

Enjoy lunch on a Cornish Farmstead

In the very South Western point of England, Cornwall has its own unique identity. Home to England’s longest coastline, Cornwall’s laid-back, rural way of life is far removed from the buzz of the inner cities. After a day of exploring the dramatic Cornish coastline of smugglers coves and fishing villages, stop for an exclusive Be My Guest lunch in a family farmstead. Learn about the 18th-Century farm heritage over a local meal and friendly ‘Cornish’ hospitality.

RELATED CONTENT: 9 UNDISCOVERED BEACHES TO DISCOVER BEFORE THE SECRET’S OUT

Walk in the footsteps of England’s most famous playwright

The birthplace of England’s most famous playwright, Stratford Upon Avon is known the world over as the home of William Shakespeare. Quintessentially Tudor in appearance, this medieval town sits on the banks of the River Avon and offers ample opportunity to walk in the footsteps of the legendary bard. Pay a visit to the timbered house where he was born, see the thatched cottage where his wife Anne Hathaway lived, and pay your respects at his humble grave in the Holy Trinity Church. Still not Shakespeared out? Round off the experience with a theatre production from the Royal Shakespeare Company, on the Elizabethan stage of the Swan Theatre.

A Royal Welcome to Windsor Castle

England has many famous castles and palaces to explore, but following the two recent Royal Weddings held here, Windsor Castle has taken its spot in the limelight. As one of the world’s oldest and largest inhabited castles, take a walk around the surrounding grounds, hire a boat on the River Thames or explore the English pubs and restaurants in the pretty town.

Enjoy the peace and tranquility of the Lake District

The UK’s best loved national park offers striking English vistas as far as the eye can see. Craggy hilltops make way for glittering lakes in almost poetic fashion, so it’s little wonder the likes of William Wordsworth, Samuel Taylor Coleridge and Beatrix Potter all put pen to paper in these parts. Lake Windermere, the largest lake in England, is a favourite amongst visitors looking to get out on the water, whilst even the most novice of hikers will be able to find a walking route that suits their abilities. Pack for all weathers and pray for sunshine; this part of England is known for its sudden downpours.

Where are your favourite off-the-beaten-path spots in England? Book a trip to England with Trafalgar and discover many more alternative destinations away from the bright lights and busy streets of the capital.