9 traditional Russian dishes to help you discover this great country

Yes, Russia may not be the first to come to mind when you think of a food destination, but this country has plenty of delicious traditional dishes to tickle your taste buds. People are often surprised at the variety and flavours of Russian dishes, which were influenced by the country’s connection to Europe, Asia, and the Middle East. Russian cuisine is a reflection of the geographical features of this enormous country, its Christian beliefs and interesting customs. These are the dishes you can’t leave this country without trying.

The story behind Russian dishes

The vast territory of the country, the wealth of its forests, valleys and rivers, formed the traditions of the Russian people and its national cuisine. The Slavs cultivated cereals and vegetables, cooked porridge and stew from them, pickled and dried mushrooms, fished, hunted and raised animals.

Traditional Russian recipes are based on the use of cereals, berries, vegetables, flour and fish. Products that were present in abundance in the lives of ordinary people. Meat dishes were often prepared for the holidays, and these were real culinary masterpieces: a duck with apples, a baked pig or even a roasted swan in the palaces of royalty.

With the advent of Christianity, typical Russian food was divided into lean and fast. For almost seven months of the year, Orthodox Christians held one or more fasts, which meant rarer preparation of meat dishes.

I was born and raised in Russia and here are my favourite dishes that you simply must try when you travel to Russia.

Russian cuisine was heavily influenced by religious traditions. For example, the custom of baking pancakes has been preserved from the days of paganism: people used to bake pancakes, round, just like the sun. Russian pancakes are very thin and not sweet like French crêpes, but you are encouraged to add any filling of your choice. The Traditional ones are pancakes with sour cream and salmon, caviar or mushrooms, and for the those of you with a sweet tooth – condensed milk or berries. There is even a special holiday, Maslenitsa, which happens every year one week before the start of spring, when for the whole week we, Russians, eat pancakes. 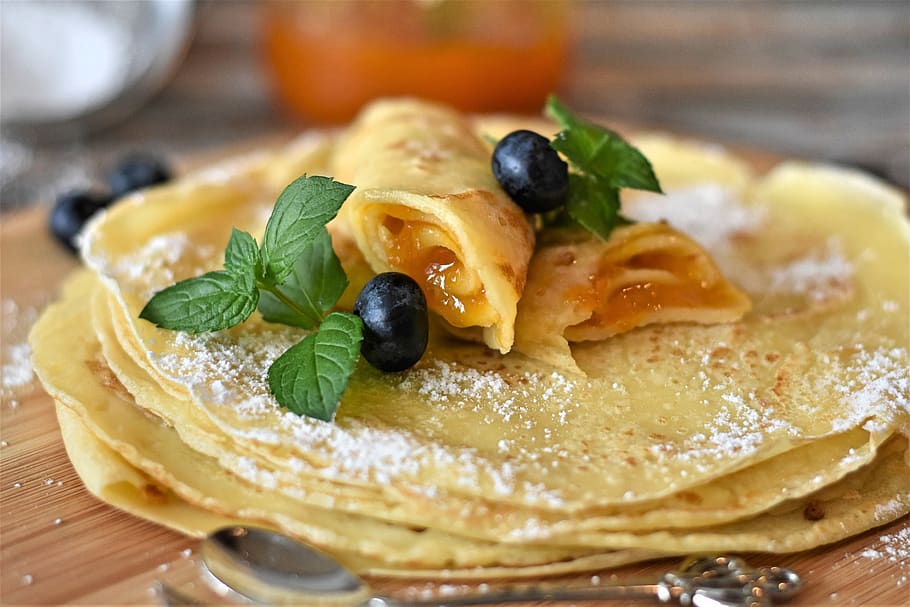 It is impossible to imagine modern Russian cuisine without such a traditional dish as pelmeni, or dumplings. Many people debate about the origins of this dish as different countries around the world have their own adaptations of it. These are Uzbek manti, and Georgian khinkali, and Jewish kreplah, or Chinese xiaolongbao. Many believe that the recipe came into Russia from China via Siberia and Ural, back in the 15th century.

In many families it’s still a family tradition to sculpt dumplings together. The filling of traditional Russian dumplings is a mixture of three types of minced meat – beef, lamb and pork. They are then served in a large bowl with sour crème. 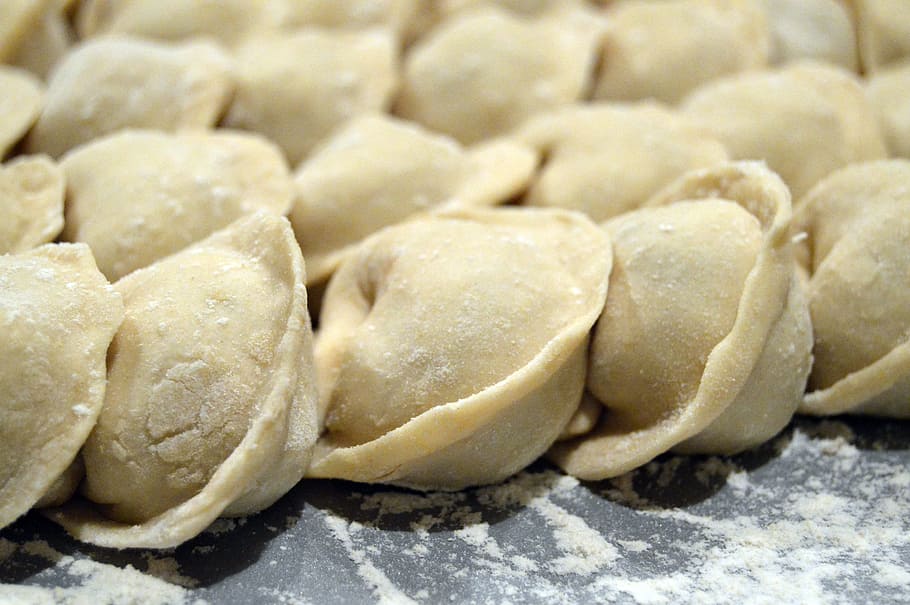 This famous Russian dish has a fascinating story. Under the Tsars, the Russian upper class was super-wealthy. They were particularly fond of Paris, often kept apartments there and communicated in French at home and social gatherings. Back in 1891, a French chef who worked for a wealthy St. Petersburg family created the dish for a cooking contest. He prepared sautéed pieces of beef served in a delicious sauce with smetana (sour cream). Beef Stroganoff, luxurious yet easy to prepare, became a signature dish with countless hostesses, and a headline entrée in upscale restaurants.

RELATED CONTENT: A love letter to Russia, the country I’m proud to call my home

This dish is my absolute favourite and the one I miss the most when I’m not home in Russia. It is yet another take on pancakes but they are made from quark (cottage cheese), eggs and flour. Simplicity and delicious taste of this recipe will make syrniki one of your favourite breakfast recipes. Crispy and golden on the outside and warm and creamy on the inside, syrniki are perfect to serve with sour cream, jam, honey or fresh berries. 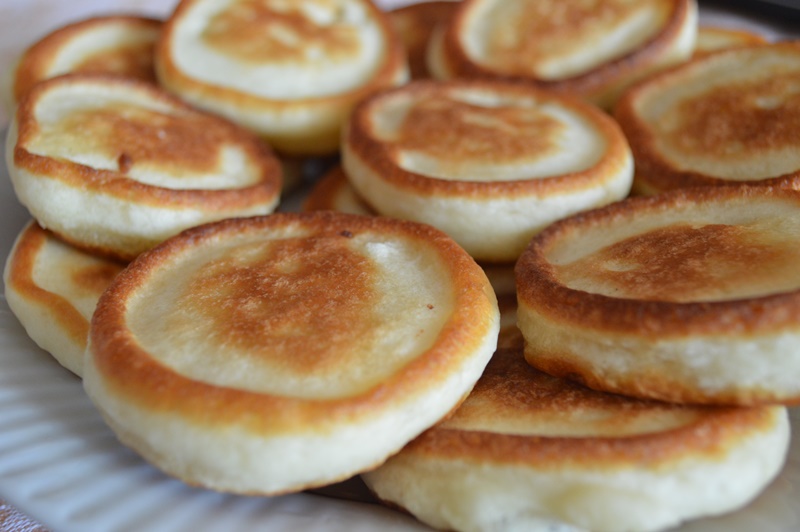 There are many different types of porridge in Russia, this is probably the most popular dish to have for breakfast in a Russian home. But, chances are, you’ve already tried those at home. The most unusual and truly Russian one that I recommend to try is buckwheat porridge. It is normally boiled in water or milk and can be an independent dish (often served with butter, sugar or condensed milk), and can also be used as a side dish to eat in the afternoon. Buckwheat porridge is very healthy and is also one of the main dishes during the Orthodox fast. 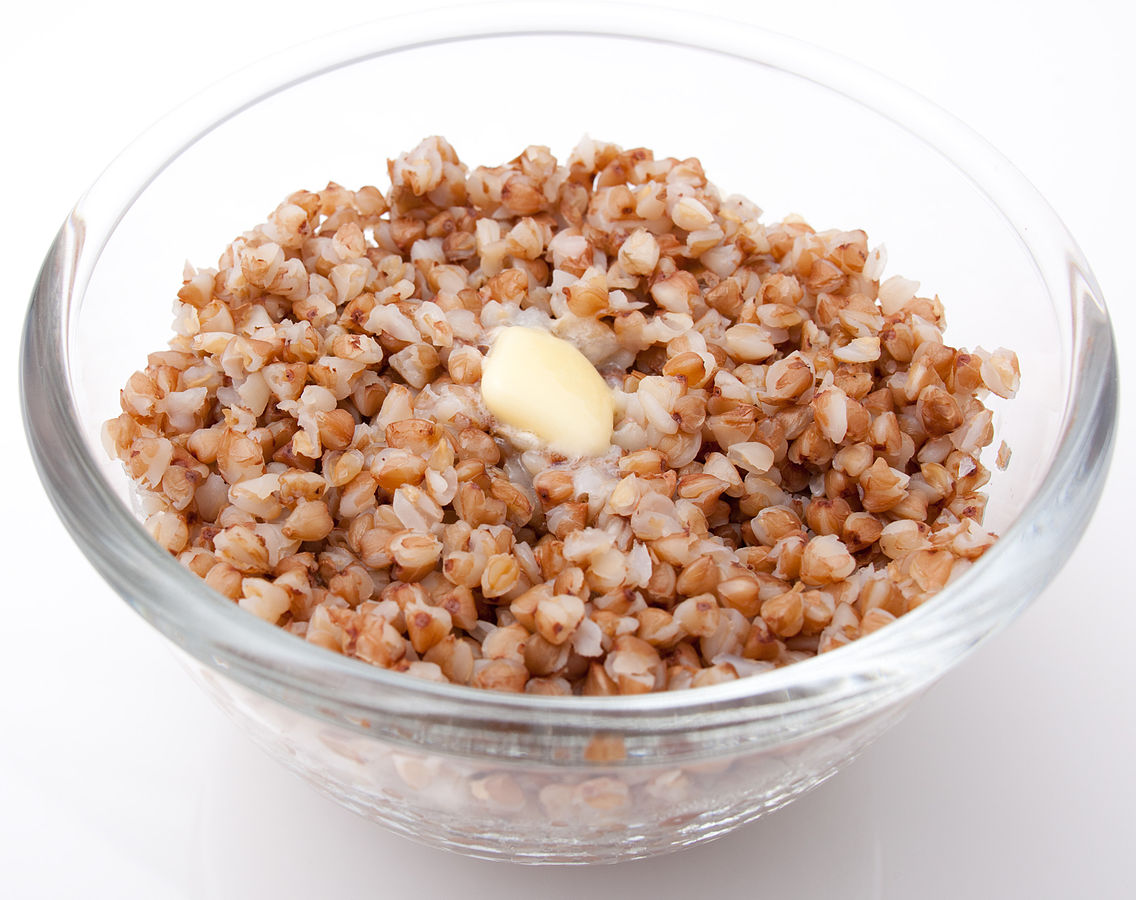 Borscht is a beetroot soup that actually originated in Ukraine and was quickly adopted as a Russian speciality as well. This soup has dozens of ingredients and can take up to 3 hours to prepare. It is full of meat and sautéed vegetables, including cabbage, carrots, onions, and potatoes. It can be served hot or cold and is best served with a dollop of fresh sour cream on top and special garlic bread called pampushka.

Soups are the most popular lunch meals across the country and this is another Russian favourite. Okroshka is a cold soup that originated in the Volga region. It’s a mix of raw vegetables, boiled potatoes, eggs, and a cooked meat such as beef, veal, sausages, or ham with kvass, which is a non-alcoholic beverage made from fermented black or rye bread.

RELATED CONTENT: A love letter to Russia, the country I’m proud to call my home 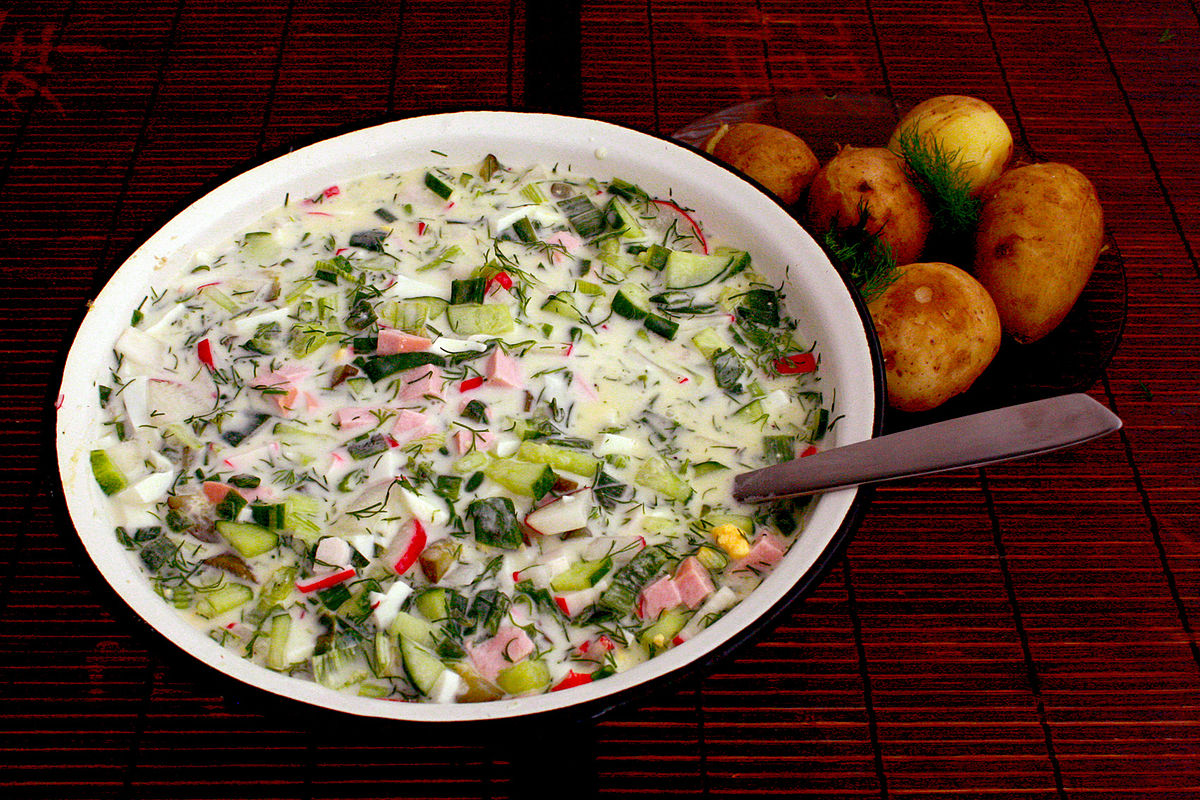 These little baked or fried puff pastries are packed full of potatoes, meat, cabbage, or cheese. The stuffed pockets are popular all around Russia, Ukraine and Belarus. It is a very popular snack in Russian schools and factories. 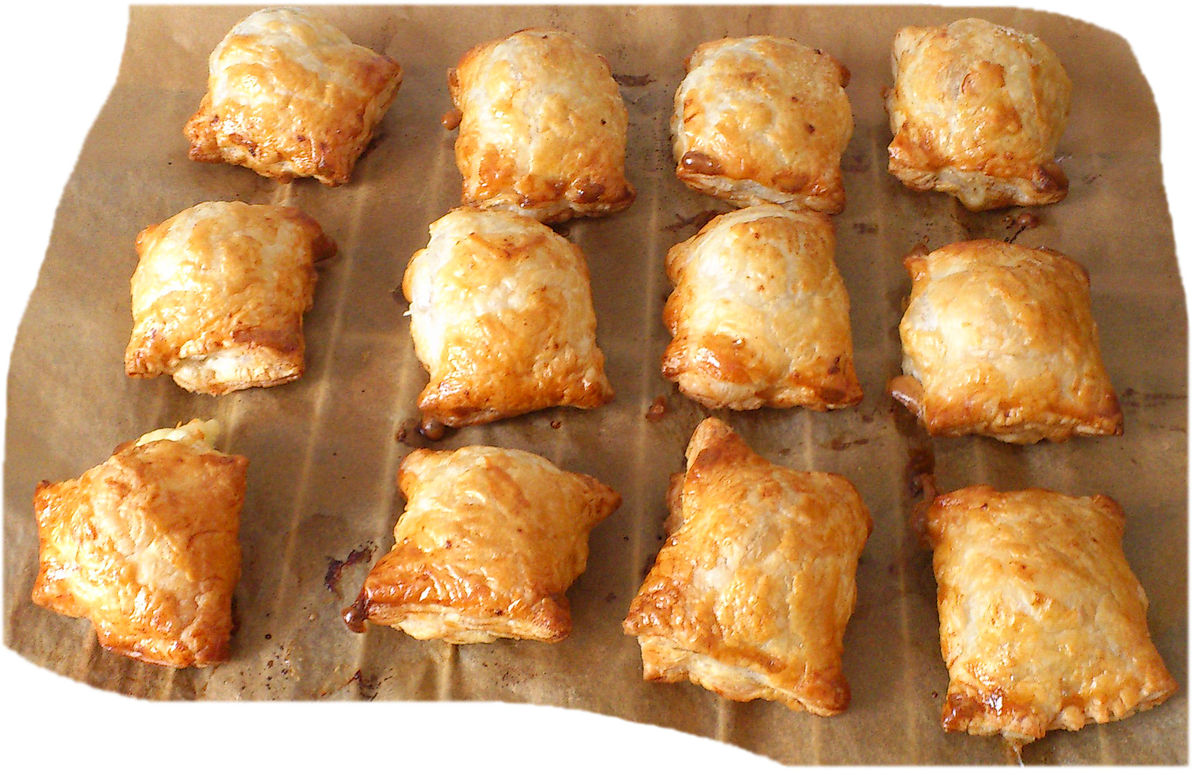 Shashlik is a Russian take on a kebab, and like any kebab, it consists of cubed meat and veggies grilled on skewers. This dish comes from the Caucasian Mountain tribesmen and became popular after the conquest of the Caucasus in the 19th century. Nowadays nearly every family has its own secret recipe for shashlik that is guarded closely. The key to success however, lies in the marinade.

RELATED CONTENT: Russia’s new e-visa has made it even easier to visit St Petersburg 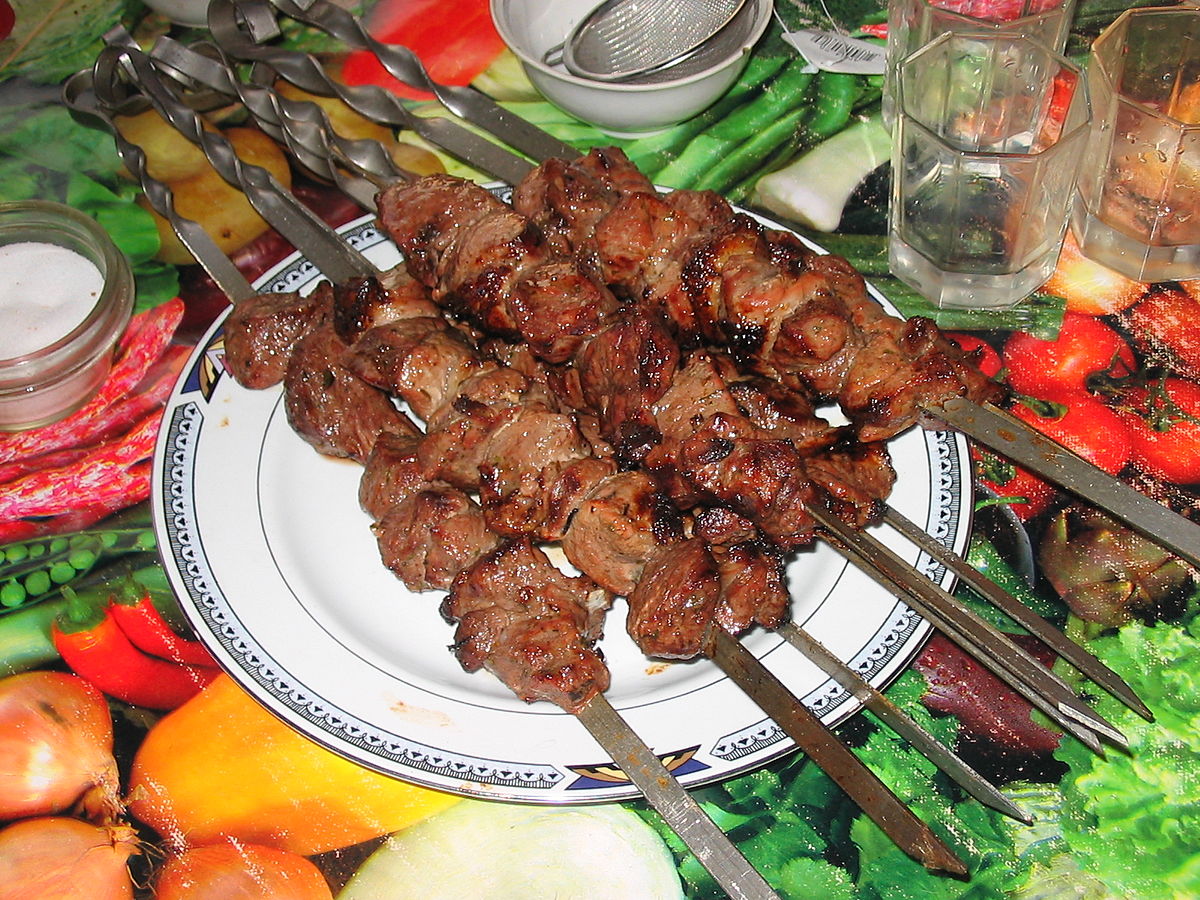 Keen to visit Russia? Book Wonders of St Petersburg and Moscow with Trafalgar to discover what this great country has to offer. Travelled to Russia before? Share your favourite Russian dishes in the comments below.

Best of Finland Russia and the Baltic States